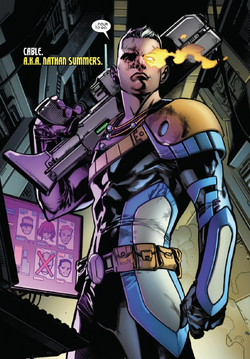 Earth-602
Base Of Operations
The Outside
Characteristics
Gender

Everyone I've ever loved has died a terrible death I wouldn't wish on my worst enemy. I held my mother in my arms as she gasped for her last breath. Watched Hank McCoy get obliterated into smithereens, powerless to save him. I'm in this to make sure no one else has to endure what I have. So don't talk to me about loss.

Nathaniel Summers is the son of Scott Summers and Jean Grey. He developed his telepathic abilities at the age of 11, a mere two months before the Sentinel Onslaught that would wipe out most of the mutant race. Nathan was raised in a hellscape ruled by Sentinels, even forcing himself to adapt and use Sentinel tech for his own implants after losing limbs in battle. Over the years, he adopted the name Cable and one by one lost everyone he cared about. His father, his mother, his Uncle Alex, and even his godfather, Hank McCoy.

After spending years on his own fighting the Sentinels, Cable was recruited by The Outsider to lead a team of heroes from across the multiverse dubbed The Outsiders. While a good portion of the team was reluctant, Cable was secretly grateful to be removed from his reality.

Retrieved from "https://marvelcomicsfanon.fandom.com/wiki/Nathaniel_Summers_(Earth-602)?oldid=246129"
Community content is available under CC-BY-SA unless otherwise noted.