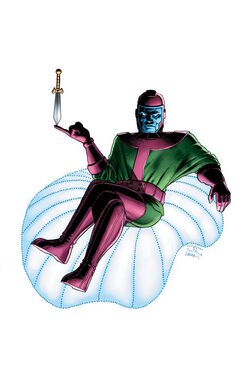 Hitler from the future
Identity

Kang is a time-traveler who wished to conquer 2019 AD, but he was defeated in his mission by the Avengers and was killed. Later he returned from death and escaped back to his universe. He later joined America Chavez and Howard the Duck to prevent a zombie plague from spreading to their realities.

Kang is approximately over 100 years old chronologically, but the people of the next generation have successfully improved biology to the point that they seem to age much slower than 21st century man. Thus he appears to be a man in his early 40s.

Retrieved from "https://marvelcomicsfanon.fandom.com/wiki/Nathaniel_Richards_(Kang)_(Earth-TRN781)?oldid=247431"
Community content is available under CC-BY-SA unless otherwise noted.