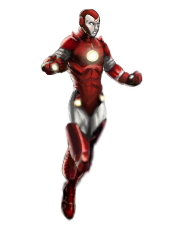 Single
Origin
Origin
Time traveler out to control all of history.
Place of Birth
[[Other Earth, 31st Century]]
Creators

Nathaniel Richards was born in the 30th century of Earth-1010; a reality where humanity never went into the dark ages. After centuries of advancement and warfare, peace was brought to the land by a time-traveler from the past named Nathaniel Richards. Because Richards brought peace to this war-torn future, he became known as the legendary benefactor. The Nathaniel Richards born to this reality is said to be a descendant of the Benefactor, although other records also indicate that he may also be a descendant of the Latverian monarch known as Dr. Doom. An inventive genius, by the age of 16 Nathaniel had already made his first invention, his Growing Man stimuloid. Richards was bullied for years, but one day when he was being beat up by a bully named Morgan, destiny stepped in and changed the course of young Nathaniel's life forever. At that moment the fight was interrupted by Kang the Conqueror, Nathaniel's future self. Kang had stepped in at this very moment to prevent Morgan from cutting Nathaniel's throat, an injury that almost killed him and bankrupted his parents when they tryed to treat it. Kang then outfitted his younger self in Neuro-Kenetic armor and showed Nathaniel glimpses of his future where he was destined to become a time-traveling conqueror and his destiny to do battle with the heroic Avengers. Kang had hopped that his past self would begin on his destined path earlier than planned, however the young Richards was horrified by what he was destined to become and attacked his future self. Richards decided to renounce his destiny and used the time traveling capabilities in his armor to travel back in time and across dimensions to the modern age of Earth-1010.

Seemingly those of Nathaniel Richards (Kang).

Transportation: Possesses a large space ship, capable of travel through both time and space.
Weapons: He typically carries various weapons, such as an anti-matter defense screen generator, a "vibration-ray" projector, an electromagnetic field amplifier, neutrino-ray warheaded missile launcher (hand-gun size), electrical paralysis generator, nerve gas sprayer and a molecular expander. He commands a vast array of warriors from across all periods of time, including his own future era, armed with advanced weaponry. He used numerous robots, most notably his Growing Man stimuloids, packed with the "Growth Pollen" of the world Cosmos, which causes them to grow in size and strength by absorbing kinetic energy; this Growth Pollen uses the same energy accessed via the size-changing "Pym Particles" discovered by Dr Hank Pym.

Retrieved from "https://marvelcomicsfanon.fandom.com/wiki/Nathaniel_Richards_(Iron_Lad)_(Earth-1010)?oldid=165262"
Community content is available under CC-BY-SA unless otherwise noted.