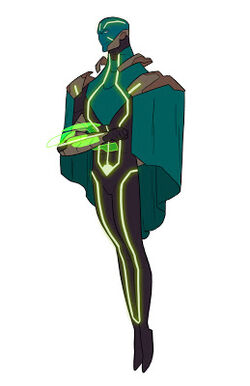 Earth-101
Base Of Operations
Damocles Base
Characteristics
Gender

Once again I find myself cleaning up a mess in the timeline caused by the Avengers. Typical.

Kang the Conqueror knew he had a pivotal role to play in the timeline, so much so that he guided his younger self through life. However, in his original life, Nathaniel Richards was always so bored by the mundaneness of existence. This feeling stayed with him through the birth of his son, Reed. However, he still believed that he was meant for so much more.

Once his older self was confident that Reed's destiny was set in stone so that the Fantastic Four would go on to be created, he felt comfortable enough to engage with his past self. Nathaniel was overjoyed to discover his own destiny, and was gifted with chrono-tech by Kang. He told himself that he was free to journey the timeline as he pleased so that he could develop into the Conqueror he was meant to be.

After making multiple jumps through history, Nathaniel settled for a little bit in Ancient Egypt. He opted to take over the historical role of Rama-Tut, and came to love his life as a ruler. However, he found himself becoming rivals with the first mutant to ever exist, Apocalypse, who Tut vowed to one day best. After Apocalypse's apparent death, things got even more complicated for Tut. The Fantastic Four traveled to Ancient Egypt from the future, and engaged in battle with him.

Refusing to risk his own timeline by telling his son's future self about their relation, he abandoned his role as Rama-Tut and jumped back into the timestream. Over time, he was able to develop himself into Kang the Conqueror, as he was always meant to be. He even set up shop in the 41st Century, where he rallied together the lost and hopeless humans and formed his own, true empire; the Kang Dynasty.

Kang enjoyed riches life never before. However, he soon came to sense a disruption in the timeline. He did a lot of studying through history's possibilities and came to discover the "Prophecy of Infinity", which foretold Thanos destroying the planet Earth and taking over the entire galaxy. Completely unwilling to let this possibility come to light, Kang travels back to the modern day in an effort to form alliances with both heroes and villains so that he could collect the Infinity Stones for himself.

Retrieved from "https://marvelcomicsfanon.fandom.com/wiki/Nathaniel_Richards_(Earth-101)?oldid=250696"
Community content is available under CC-BY-SA unless otherwise noted.