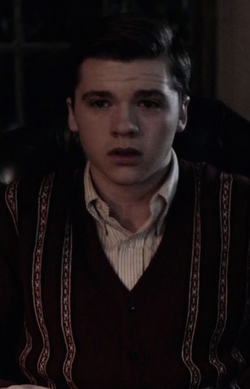 Forever to the end, brother.

Nathaniel Malick was a member of Hydra during the mid-20th Century. As a member of the prestigious Malick family, Nathaniel was a firm believer in the HYDRA religion that was devoted to finding a way to bring an ancient Inhuman back to Earth from its exile on Maveth.

After the death of his father, Nathaniel and his brother Gideon were summoned to see Daniel Whitehall, who tried to persuade the boys into leaving the "archaic" Hydra their father represented for a more modern, scientific Hydra. Whitehall tried to shake their belief in the Hydra religion by suggesting their father rigged the lot-drawing ceremony so he would never be sacrificed to the Hydra god, and told the Malick brothers to look for evidence of their father's cowardice in his copy of Paradise Lost.

Nathaniel was sent through the Kree monolith to Maveth, where he became a host for the Hydra god. The ancient Inhuman made its way back to Earth over 45 years later due in part to Gideon Malick's efforts. The Inhuman retained the memories of all its hosts, including Nathaniel, and exacted his revenge on Gideon by killing his daughter Stephanie.

Retrieved from "https://marvelcomicsfanon.fandom.com/wiki/Nathaniel_Malick_(Earth-1010)?oldid=198514"
Community content is available under CC-BY-SA unless otherwise noted.