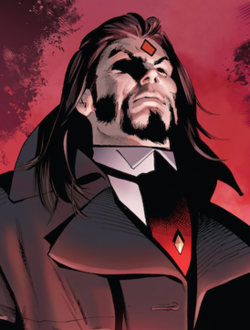 Nathaniel Essex has always been fascinated by the mutant X-Gene. So much so, that he traced its history all the way back to ancient Egypt, to the first Age of Apocalypse. Adopting the alias of Mister Sinister, he set out to resurrect Apocalypse and usher in a new age of mutant supremacy.

Sinister's plan worked, and Apocalypse recruited him to be his second in command. Over the years, they expanded their vast empire and began abducting young mutants from all over the world. Sinister would educate them in the training centers to become loyal, expendable soldiers in the Armada.

However, Sinister would eventually be betrayed by his own adopted son, Cyclops, who finally developed the courage to stand up to the Armada. Sinister tried to stop him, but was met only with an unrelenting optic blast that peeled the skin straight from his body, incinerating his skeleton.

Retrieved from "https://marvelcomicsfanon.fandom.com/wiki/Nathaniel_Essex_(Earth-9999)?oldid=245660"
Community content is available under CC-BY-SA unless otherwise noted.