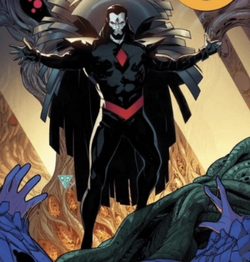 The Maddest Scientist to Ever Mad Scientist
Identity

This is indeed quite fascinating... I've never seen a mutant with such delectable DNA before.

Nathaniel Essex is a mad scientist hellbent on creating the perfect mutant specimen through any means necessary. He has spent his career kidnapping and experimenting on countless mutants, even himself. He continued hitting dead end after dead end, until the X-Force made their public debut as a team.

He then became obsessed with Cyclops and Jean Grey, believing if he could meld their DNA together, he could create the perfect being to transfer his mind into. However, his plans continued being derailed as the X-Force proved too powerful for him to best, even after recruiting other mutants to work for him.

Sinister became desperate, and went on to discover the ancient mutant Apocalypse buried deep underground in Egypt. After setting him free, Sinister agreed to help Apocalypse enact his plan of taking over the world, believing this would give him access to all the DNA he could ever want. He even helped Apocalypse recruit and brainwash his new Horsemen. He was ecstatic at the opportunity to develop new wings for the recently amputated Angel.

Despite the overwhelming power Apocalypse and the Horsemen possessed, they were not enough compared to the combined might of the X-Force and the Brotherhood of Mutants. Sinister tried to fight back before becoming overwhelmed and attempting to make his escape. However, he was pursued by Magneto, who manipulated his own armor to impale him from multiple points, ending by decapitating Sinister. After the battle was over, he then sent his Brotherhood to all of Sinister's known labs to eradicate any possible clones of himself he'd created.

Retrieved from "https://marvelcomicsfanon.fandom.com/wiki/Nathaniel_Essex_(Earth-101)?oldid=259323"
Community content is available under CC-BY-SA unless otherwise noted.