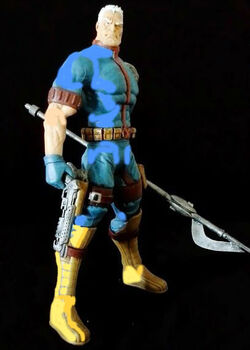 Single
Origin
Origin
Telepathic mutant who returned the Avenger to the X-Men.
Creators

Cable's history is likely the same as that of his Earth-616 counterpart up until the events of the Twelve.

He and his mother went into the desert searching for Apocalypse and Cyclops. Upon discovering the two had swapped bodies, he brought them back to the X-Men.

Equipment: None known.
Transportation: None known.
Weapons: Cable possesses his scimitar, as well as a few guns.