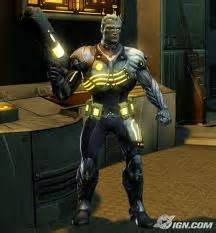 White, (formerly brown)
Unusual Features
Had a techno-organic left eye, left arm, and shoulder due to infection as an infant with a Techno-Organic Virus. His left eye glows, for some reason related to his mutant powers. It is evidently unrelated to his original telekinetic and telepathic powers, as the eye still glowed with his brief cyberpath powers.
Status
Citizenship

Little is known about Cable's life before the Civil War. It can be assumed to be similar to his mainstream counterpart.

Cable was a member of the Anti-Registration campaign and helped with the protection of the data and weapons from the Pro-Registration forces. Cable was one of the many heroes who was presumed dead after the Prison 42 battle.

However he somehow found a way out of the Negative Zone and back to Earth to fight off the Fold with the Ultimate Alliance.

Cable was part of a raid an an abandoned A.I.M. base repurposed by the Skrulls. Other superhumans who participated were Captain America, the Taskmaster, Spider-Man, the Rhino, Sandman, Penance, Kraven the Hunter, and Vulture. He was ambushed by a Ghost Skrull and captured, only to be freed minutes later.

Retrieved from "https://marvelcomicsfanon.fandom.com/wiki/Nathan_Summers_(Earth-6109.2)?oldid=128844"
Community content is available under CC-BY-SA unless otherwise noted.