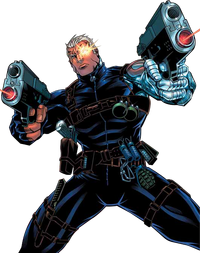 In a dystopian future, after Galactus wiped out the Earth's superheroes in 2014, he decided the Earth had potential and instead of devouring it, he made it his permanent base of operations while he ruled it with an iron fist.

Nathan was born to mutants and survivors of the Superhero Massacre, Cyclops and Marvel Girl. As a child, Cyclops and Marvel Girl were killed by the Silver Surfer, Galactus' herald. Nathan was then discovered by another mutant survivor, the man who used to be known as Daredevil and also the leader of the Knights; a resistance group compromised of ex-superheroes. Matt would go on to raise and train Nathan in combat and using weapons.

Going back in time

Nathan jumped through the portal and arrive in the present. Nathan would immediately head to Westchester and find the X-Men and warn them of Galactus' incoming arrival.

When arriving to Westchester, he is immediately attacked by the X-Men who thinks he's an intruder. Cable would quickly defeat the X-Men and informs them he's not a threat and is here to help, the X-Men take him to Professor Xavier. Professor Xavier reads Cable's mind and discovers he's from the future and is the son of Scott and Jean, now trusting Cable. Cable then informs Xavier and the X-Men that in the future, Galactus arrives and defeats Earth's superheroes and creates a hellish future. The X-Men then ask how are they supposed to defeat him to which Cable explains that this time the world's superheroes will be prepared for him and that they all had to unite against Galactus.

After the X-Men finished contacting Nick Fury he asked them to bring Cable in for questioning as well.

Upon arriving to the Triskelion Cable sees and attacks Silver Surfer for all the horrendous things he'd do in the future, the two engage in a fight that almost destroys the Triskelion, the Silver Surfer ends the fight with his foot on Cable's throat and explains to him that he apologizes for the horrible things he's done and regrets them, but he did it for his planet. Cable reluctantly forgives Silver Surfer and the two come to an understanding.

Silver Surfer realizes that he hasn't reported back to Galactus in over 24 hours and if he doesn't report back in 24 hours, Galactus would launch his assault. Suddenly, the Surfer's word proved true, Galactus had arrived. The Silver Surfer tells them not to completely panic as Galactus always begins a path of destruction shortly before consuming it, Nick Fury orders the Avengers except Hank Pym and Tony Stark, the Fantastic Four except Reed Richards and the X-Men to distract Galactus while Stark, Pym and Richards continue working on a way to stop Galactus with Cable and Silver Surfer following behind.

The two arrive to see Galactus has almost destroyed the three teams. Cable and Silver Surfer begin battling Galactus only for Cable to be knocked out easily which leads to Surfer battling him alone. Silver Surfer realises he can't battle him alone and retreats and uses an untapped power the allows him to teleport himself, the other superheroes (including Spider-Man and Daredevil) back to the Triskelion.

Suddenly, Galactus arrives and attacks the Triskelion. Cable and the heroes begin battling Galactus to hold him off while the brains attempt to blueprint a wormhole device. After a long battle the heroes are defeated by Galactus but luckily the brains have come up with a way of creating a portal device, they wake up Quicksilver to build the mission, although Quicksilver will need a distraction, Bruce transforms into the Hulk in a berserker rage and begins pounding Galactus. From looking at the blueprints, Quicksilver builds the device and activates it creating a wormhole. Hulk with a limited understanding keeps on punching Galactus in the direction of the wormhole and attempts to push him into it, as Galactus falls into the wormhole he grabs the Hulk and with no way to escape his fate seems to be sealed.

Mind Alteration: Ability to alter the minds of others by force of will.

Precognition: The ability to foresee events before they have even come to pass.

Retrieved from "https://marvelcomicsfanon.fandom.com/wiki/Nathan_Summers_(Earth-1111)?oldid=176155"
Community content is available under CC-BY-SA unless otherwise noted.