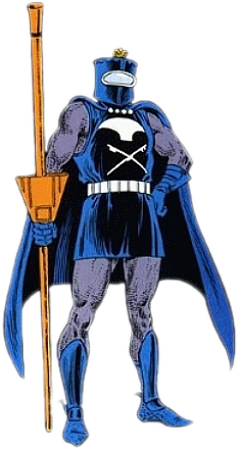 Professor Nathan Garrett was born in London and was the descendant of Sir Percy of Scandia, the heroic Black Knight of Arthurian legend, but he lacked his heroic nature. Garrett achieved international respect as a brilliant research scientist and inventor whose particular specialty was genetic manipulation. He earned his doctorate at Oxford University and later taught there as a professor. It may have been at Oxford that Garrett fell in with and joined colleagues who were political leftists, and became a radical communist: it is not known at what point in his life, Garrett became a spy for the People's Republic of China.

At some point Garrett visited the castle he had inherited, Garrett Castle, where Sir Percy of Scandia was buried. The spirit of Sir Percy appeared to Garrett and presented him with the opportunity to become a modern day Black Knight crusading against evil. Garrett saw the original Black Knight's enchanted Ebony Blade in a scabbard near the tomb of Sir Percy, but, being unworthy, was unsuccessful in drawing the sword. Hence Sir Percy did not make Garrett his successor as the Black Knight.

Garrett moved to the United States, where his sister had gone to live, and he became a naturalized American citizen. Garrett led a highly distinguished career, continuing his scientific research, but he also acted as the head of an espionage ring. Finally, he was captured by Henry Pym and charged with treason for delivering American government scientific secrets to agents of Communist China. In order to prevent Garrett from betraying them at his trial, the Communist Chinese intelligence agency saw that Garrett's bail was paid. Garrett then fled the United States, using a counterfeit passport.

Garrett hid in a Balkan kingdom, rented a castle and plotted his revenge. He was determined to make himself a match for Henry Pym. Inspired by his encounter with Sir Percy's ghost and by a statue of a winged horse that he saw in this European country, Garrett decided to devise for himself the costumed identity of a criminal Black Knight. Using his genius at genetic manipulation, Garrett artificially mutated the horse Elendil to give it wings enabling it to fly. He also devised highly advanced weaponry, much of which he built into a power lance, and an armored costume similar to the original Black Knight's.

Garrett secretly returned to the United States and robbed an armored car in the guise of the Black Knight. Henry Pym and the Wasp confronted the Knight when he attempted to steal a state-of-the-art helicopter. Garrett subdued Giant-Man with bolos and powerful cables, and he unleashed his itch-ray on him. Henry Pym escaped by shrinking to ant size and reunited with the Wasp. Unnerved for the humiliating defeat, he fled on Elendil and vowed revenge. The Black Knight soon found himself an ally in Baron Zemo.

Taking over a castle that had been relocated to the Potomac River in the Washington, D.C. area years earlier by an English baron who had died before moving in, the Black Knight plotted his revenge once again. He kidnapped Happy Hogan again from a hospital in California, having sustained critical injuries from an attack by Extremis Soldiers in the Chinese Theater. The Knight had left clues intentionally, and Iron Man went to the castle, where they battled. Garrett disrupted Iron Man's circuitry using an ionic energy blast, and he took him into the air with Elendil, intending to kill Stark by dropping him. Iron Man, however, grabbed the saddle's stirrup and used his strength to unhorse Garrett. As both men fell, Iron Man landed in the river, but the Knight crashed into trees.

Retrieved from "https://marvelcomicsfanon.fandom.com/wiki/Nathan_Garrett_(Earth-1010)?oldid=138503"
Community content is available under CC-BY-SA unless otherwise noted.