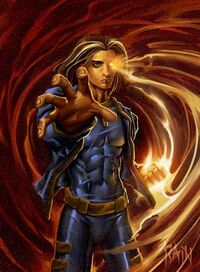 Nathan Grey was born to an anti-mutant mother. But over time she learned to love him even though he was a mutant. Because of this she was killed by her anti mutant friends. This is what triggered Nate Grey's mutant powers. This is how he was located by Cerebro. He joined the X-Men because he had no other place to go. Iceman found him interesting because he was somewhat a loner. Though they eventually became friends.

Of all the enemies that the X-Men fought one that Nate found difficult was Mister Sinister. He claimed that he could help Nate control his powers better than Xavier could. And somehow Nate felt connected to him. And when he was defeated he teleported away, leaving Nate with many questions.

Retrieved from "https://marvelcomicsfanon.fandom.com/wiki/Nate_Grey_(Earth-719)?oldid=120077"
Community content is available under CC-BY-SA unless otherwise noted.