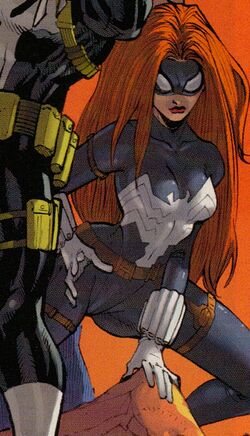 No one has ever controlled it, but everyone has tried. It turns out that the super-soldier serum nulls its mind, allowing unlimited control. But I still love to kill when I have it on.

Venom's history is exactly the same as that of Earth-616's Natalia Romanova up until the Marvel NEW! relaunch.

While doing a recon mission for the Avengers, Natalia discovered the Venom symbiote had returned. She bonded to the symbiote due to both party's willing consent. After having tests conducted, Rhodes discovered that Natalia's version of the Super-Soldier Serum was numbing Venom's evil intent. She adopted the persona of Venom, and joined the reformed Secret Avengers as the secret weapon.

Natasha is a master of combat, weapons, and acrobatics. She retains her knowledge of spy tactics, is an expert marksman, and has genius-level intellect potential, though she has never exploited it.

Venom Symbiote: Natasha wields the Venom symbiote, which enables her to perform the following tactics:

Retrieved from "https://marvelcomicsfanon.fandom.com/wiki/Natasha_Romanoff_(Marvel_NEW!)?oldid=255500"
Community content is available under CC-BY-SA unless otherwise noted.