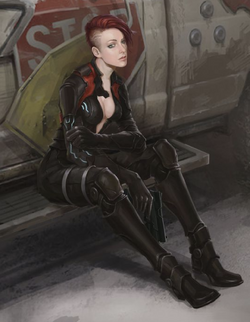 I refuse to die here. When and if I die, it's going to be on my own terms.

The Black Widow was trained to be a KGB Spy who eventually traded her allegiance and joined S.H.I.E.L.D. in the fight against Apocalypse.

After S.H.I.E.L.D. fell, Black Widow joined the Avengers to continue fighting alongside her partner, Hawkeye. However, Black Widow was eventually on the wrong side of a divide during a battle and ended up being captured by Apocalypse's forces.

Stripped of her weapons and technology, Natasha was placed in the human death camp for former superheroes, the Sphinx, and placed on death row for her crimes against Apocalypse. However, she has since attempted to rally her fellow prisoners, including Ben Grimm, Stephen Strange, and several others, to rebel against their oppressors.

However, despite her best efforts, the rebellion failed. After news of Mister Sinister's death spread to the death camps, a mass extermination order was put into effect by the Archangel. Natasha and her fellow heroes were all forcibly led into a Terrigenesis Chamber, where they were exposed to the Mists, and died due to lacking Inhuman DNA.

[[Category: In a Relationship with Clint Barton Characters]]
Retrieved from "https://marvelcomicsfanon.fandom.com/wiki/Natasha_Romanoff_(Earth-9999)?oldid=245827"
Community content is available under CC-BY-SA unless otherwise noted.