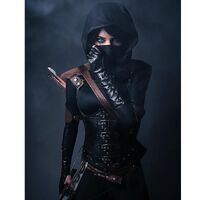 Goddess Of Thunder, call me Thor.

-- Natasha after gaining her powers

Natasha was the daughter of HYDRA leaders Monica Rogers and Wolfgang Von Strucker. She and her brother Lester were both trained as assassins for HYDRA until Natasha was kidnapped and taken to the Dark Dimension by Sandman and Ka-Zar, two slaves of Volstagg, the protector of the Dark Dimension and a former Asgardian warrior. Volstagg gave Natasha the hammer of Thor, and she and Ka-Zar were freed, but Sandman was left behind.

The hammer transported Natasha to Asgard, and she could hear Volstagg's voice in the wind, learning that he was now going by the name Falcon. Ka-Zar explained that she was actually Ororo Munroe, a cashier who was kidnapped by Volstagg and was trained by him in the ways of the mystic arts, and she became the leader of the Asgardian army as Sandman watched on with jealousy. Valkyrie, Scorpion and Grey Gargoyle were all humans who had became Asgardian warriors, they had long-awaited the arrival of a new Thor, and they celebrated all over Asgard.

At some point after becoming Thor and being transported to Asgard, Natasha had two sons with Ares, Magnus and Tenco.

Later, Scorpion created a robot named "Victor Mancha" codenamed "Galactus", and although he went rogue and killed thousands, he eventually became one of their closest allies.

Natasha went on to form the Ruler Regard, representing the Asgardians, along with Hercules, Storm, the Geographer, Dormammu, the Collector and Midas.

One day, Victor, Nick and Natasha went to Earth to find someone to fill the role of Heimdall, and then met John Walker, a soldier in the British army. Natasha made John the new Heimdall and eventually fell in love with him, and they married. Tragically, this marriage only lasted for a few days, as John was killed by Agamotto, Volstagg's son.

Jennifer Walters forced Natasha to kill her cousin Dane through a mind control spell, so she temporarily rebranded herself Lady Whitman before changing her alias back to Thor a few days later.

Sandman was eventually able to escape Volstagg's wrath. Natasha, along with the Scorpion, Grey Gargoyle, Galactus and Ka-Zar went after him, but he was too fast with his moves. He scarred and nearly killed Victor and tried to destroy Asgard, but Victor killed him and kept his soul, revealing his affiliation with the Hell Masters.

Ka-Zar heard the Scorpion talking to The Medusa confirming the fact that Scorpion is Natasha's grandfather which Ka-Zar tries to tell Natasha about it but Natasha just doesn't believe it, the Scorpion then confirms the knowledge and tells her himself, Ka-Zar is friends with Natasha's grandmother who turns out to the Medusa from before who then betrays and blasts a huge cosmic wave at Ka-Zar and tries to kill Natasha but ends up having to go back to Nidavellir at the hands of the Vulture aka Monica Rogers, Natasha's mother and The Medusa's daughter.

Natasha traveled to the Hell Masters' Realm with her mother to find Galactus but ended up finding her long lost aunt, Mystique (real name Maya Lopez), who had been taken by Stephen Strange at birth as an agreement with The Medusa and Scorpion, Maya then tried to kill both her niece and sister as Maya was also a member of the Hell Masters, causing them both to escape.

Natasha wields the powers of Thor, including

Martial Arts Knowledge: As a kid, she was trained in martial arts as an assassin for HYDRA.

Retrieved from "https://marvelcomicsfanon.fandom.com/wiki/Natasha_Romanoff_(Earth-37U)?oldid=257442"
Community content is available under CC-BY-SA unless otherwise noted.