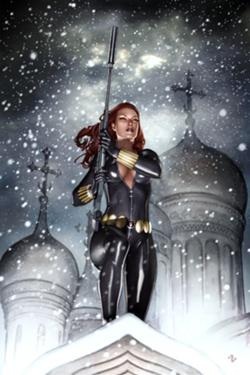 Natalia Romanoff was born in Stalingrad, USSR. When she was 12 her house was raided by Soviet Soldiers who killed her parents. A Soviet soldier found her hiding under her bed when he dragged her out before he could killer her he was shot by his fellow Comrade. The man told Natalia his name was Ivan Petrovich, Ivan then hid her in the shed of their back garden. Ivan came back hrs later and took her under his wing.

Ivan trained Natalia and changed her name to Natasha Romanoff so that she couldn't be traced. Ivan taught her how to use blades,guns and in Martial Arts. Ivan would take Natasha into the woods where he would set up a situation and ask her to solve it by eliminating the targets without any civilians getting hurt.

When Natasha was 17, She and Ivan went out hunting when they saw Soviet Union killing innocent civilians. Natasha killed the Soviets while Ivan cleared the village. Natasha then told Ivan that they were Germans in disguise. Natasha and Ivan ran into a barn where the saw Baron Helmut Zemo kill three farmers. Natasha tried to attack him but he kicked her aside and strangled Ivan with a thin wire until he died. Helmut then set the barn on fire and left Natasha and the farmers daughter to die.

Retrieved from "https://marvelcomicsfanon.fandom.com/wiki/Natasha_Romanoff_(Earth-2226)?oldid=53180"
Community content is available under CC-BY-SA unless otherwise noted.