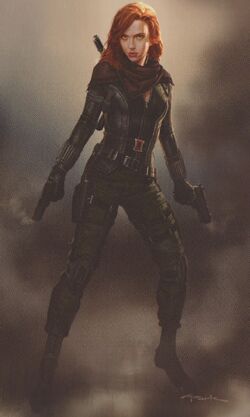 Earth-1515
Base Of Operations
The Underground
Characteristics
Gender

I'm trained to be able to kill you slowly. Over the course of days. I could have you begging for death, only to be met with pain.

Natasha Romanoff was abducted as a baby and raised in the Red Room, a Russian training program that breeds young girls to become assassins. She would eventually graduate at the top of her class and be dubbed the Black Widow, and be deployed on missions. She eventually came into contact with the Squadron Supreme member, Black Panther, who slashed her across the stomach and raped her. Horrified by what the Red Room had exposed her to, she went rogue, killing everyone involved and burning the whole place to the ground.

Shedding the moniker of the Black Widow, Romanoff went on the run, only to be tracked down by Nick Fury and Clint Barton, who offered her a chance at revenge against the Black Panther and the Squadron Supreme.

After joining the team, Natasha became close with Clint, who taught her what it meant to have humanity, and the two inevitably fell in love. With Natasha never having had a meaningful relationship before, she is fiercely dedicated and protective of Clint.

[[Category: In a Relationship with Clint Barton Characters]]
Retrieved from "https://marvelcomicsfanon.fandom.com/wiki/Natasha_Romanoff_(Earth-1515)?oldid=245826"
Community content is available under CC-BY-SA unless otherwise noted.