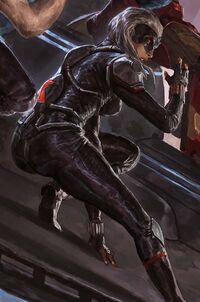 Red
Unusual Features
A scar along her back from a battle with Viper (aka Madame Hydra.)
Status
Citizenship

Widowed
Occupation
Adventurer, intelligence operative; former schoolteacher, fashion designer, ballerina
Education
Intensive espionage training through Taras Romanov, the Red Room Academy, and others
Origin
Origin
Natasha Romanoff is an expertly trained intelligence agent. She was trained in the Red Room to be one of the deadliest assassins, as well as an expert spy.
Place of Birth
Stalingrad, U.S.S.R.
Creators

Your friends die or go mad. You never know whom to trust. You'll never have a normal relationship. And if you do find love, remember one rule. Never have kids. Never.

When she was a child, Natasha’s family was murdered, so she was never able to meet her mother nor her brothers. Natasha was raised from very early childhood by the U.S.S.R.'s "Black Widow Ops" Program. She was also raised by Ivan Petrovitch (her so called foster father.) She was later taken to Department X, with 28 other young female orphans, where Natasha was trained in combat and espionage at the covert "Red Room" facility. She was also bio-technologically and psycho-technologically enhanced; an accounting that provides a rationale for her unusually long and youthful lifespan. She never really trained in ballet in the Bolshoi Theatre, having instead artificial memories. Natasha was trained to be a strong and cold blooded killer, as well as a spy. She was later arranged to marry Alexi Shostakov (aka Ronin), a distinguished Soviet test pilot.

The KGB (And So the Black Widow Was Born)

The Soviet government intelligence (KGB) decided that the skill set of this couple would make them superb special operatives, and split them up while Alexi was away on a mission. Trained as the Red Guardian, Alexi became the Soviet Union’s answer to the United States’ Captain America. Natasha was told that her husband died in an experimental rocket crash, and was drafted into the KGB. She became their best operative from being trained in the infamous Red Room Academy, becoming excellent at fighting and information gathering. During this time she had some training under the Winter Soldier. It was there she was first dubbed the “Black Widow.”

Natasha was assigned a mission to assassinate a man and in order to do so, she had to infiltrate Stark Industries. She tried many a time to do so, but was always foiled by Iron Man. After her foiled attempts, Natasha eventually met Hawkeye, who was a novice archer at the time. She enlisted his help and because of this, Hawkeye was looked at as a criminal because of it. After one failed attempt, Natasha was given a new outfit to help her better infiltrate places by allowing her to scale walls and fire lines to swing from. The next time she and Hawkeye fought Iron Man they almost succeeded in defeating him, but Widow was injured and Hawkeye retreated in order to save her. At the time, Natasha was trying to defect herself from the Soviet Union, she also began to have feelings for Hawkeye, which weakened her loyalty. When the KGB discovered this, they had Widow gunned down. She was sent to a hospital, which lead Hawkeye to change his ways and seek membership with the Avengers, getting her to join in as well.

Association with the Avengers

Natasha was later captured by her masters again and brainwashed, she was forced to hire the Swordsman and Power Man to destroy the Avengers. When the Avengers defeated both of the villains that were sent to stop them, Natasha was able to shake off the effects of her brainwashing. Natasha tried to make amends every chance she got and she was eventually recruited thanks to a bit of cover from Hawkeye and also for helping the Avengers on every one of their missions in order to make up for what she had done. Natasha was later send to spy on her former master on behalf of S.H.I.E.L.D. by Nick Fury. This caused Natasha to decline membership and to break off her relationship with Hawkeye in order to keep her plans secret. The press then branded Natasha a traitor, which broke Hawkeye’s heart. When Natasha went to spy on her masters, she was locked up after her masters tried to brainwash her to no success. Once the Avengers learned she was a prisoner, they came to Natasha’s aid. During this time, they clashed with her thought to be dead ex-husband Red Guardian (aka Ronin.) Throughout the mission, Natasha was saved and also injured, and Red Guardian perished in the battle. After she recovered, Widow also returned to Avengers Tower and decided to give up her career of being a hero. Her hiatus was not very long lived however. Natasha later returned to the team. Her relationship with Hawkeye had become very strained because he was always too busy for her. Tired of not being in the field, Natasha accepted a mission from Nick Fury to stop Egghead from using a device to hold the world ransom. When Natasha was captured, Hawkeye came to her rescue by becoming the new Goliath in order to rescue her. With the help of the Avengers, Natasha was able to defeat Egghead, who died along with Hawkeye’s brother Trickshot. Natasha had a prolonged absence from the team before she ended her relationship with Hawkeye.

Natasha wasn’t able to stop being a super hero for much longer.  After making herself a new sleek black costume and adapting her bracelets with electric "Widows Bites", she tried to prove just how good she thought she was by defeating Spider-Man. Although Spider-Man was sick and not at his full capacity to fight, he was still able to beat Widow, however she resolved to continue her career as a costumed adventurer.

After a few solo mission and some time away from the team, Natasha eventually decided to return to the Avengers. She later began a relationship with Steve Rogers, much to the jealousy of her ex Hawkeye, he soon got over this however and moved on with Mockingbird, and the two became close friends again after a few operations together. During a battle against Loki, Steve was injured almost to the point of his death, he was later taken to a hospital where he decided to retire from being Captain America and passed his shield on to the former Winter Soldier, James “Bucky” Barnes, he also ended his relationship with Natasha in order to pursue his own goals independently. As Natasha and Bucky worked closely together, they began a relationship that blossomed quite fast between the two of them being that they both had similar situations in their lives. The two did not judge each other as much as others did and they worked well together. They eventually became engaged and married with a large ceremony where all of the other Avengers attended as well.

The Betrayal of a Lifetime (Going Rogue on S.H.I.E.L.D.)

During a mission assigned by Fury, Natasha and her now husband James went on a simple mission to stop a few Hydra officers from getting their hands on poisonous chemicals. During this mission however, the couple was ambushed by a second hydra attack team, led by Madame Hydra. Widow was given a large scar from being whipped by Viper and she and James were taken away. After days of being tortured by Hydra and their leaders, Natasha and James were branded useless and, in order to “play with her prey” a little more, Viper murdered James and before dropping Natasha from her plane said “If you survive this, say hi to Fury for me. After all, this was all his idea.” Natasha was of course able to save herself and get herself back on that plane where she defeated all the Hydra guards in her rage and she held her gauntlets to Viper, questioning her about why she stated it was Fury’s idea to where Viper said “He wanted James out of the way. You both knew too much, but he knew you would come around and back to him eventually.” As Madame Hydra laughed, in her rage, and through her tears, Natasha murdered Viper without thinking. Realizing what she had done, Natasha decided to get her revenge on Fury, as well as his organization of S.H.I.E.L.D. for his betrayal. She would stop at nothing to bring him down, and anyone who got in her way would be dealt with and given all of her might. With the decision to go rogue, Natasha knew it would not be that simple. She knew that she would need to gain allies, she knew that she would have to stop Fury, and she knew it would be one of the hardest struggles of her life, but to get her vengeance, she would go through the flaming pits of Muspelheim if she had to. With this in her head, Natasha began planning her revenge. She knew the first person she had to tell was Clint, but she had to be sure, she had to be sure he would not betray her to. Sadly, if Steve Rodgers were an ally of hers, she could not reach him at the moment due to his retirement from the Avengers. The next day, Fury had already brought in a new recruit to replace Bucky. It was a woman, and she was to be the new Captain America. She was tall and her muscles huge, she wore an outfit similar to that of Steve’s, but in Natasha’s eyes, she was no Captain America, but perhaps she could help her, if not now, then later. While Natasha had planned to pull him aside, it was Clint who pulled her aside, and told her that what happened was wrong, that he had no idea what Fury was planning. While some of the team stayed to train with the new Captain, Natasha and Clint went to Bucky’s funeral, held in a S.H.I.E.L.D. base where Natasha was able to see what was left of Bucky’s body, even while in tears, this only fueled her rage. With Hawkeye at her side, Natasha and Clint plotted together on how to stop Fury.

Taking Down S.H.I.E.L.D. (The Widow's Bite Shall Sting)

Wanda's Dark Avengers (How We Won, I Still Do Not Know)

Retrieved from "https://marvelcomicsfanon.fandom.com/wiki/Natalia_Romanova_(Earth-88)?oldid=122813"
Community content is available under CC-BY-SA unless otherwise noted.