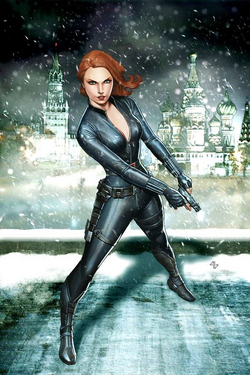 Let's just finish the job now, shall we?

Natalia Alianovna Romanov was born in the early 1980s, in Stalingrad, Russian SFSR, USSR and went on to become a world-class spy. She reportedly began training towards the life of an assassin when she was just a child, and her ruthless effectiveness in later years earned her the code name, Black Widow. While she was a teenager, her mother, who was also an assassin who was working for the Red Room was critically injured during a battle with S.H.I.E.L.D., died days later, much to Natalia's surprise and grief.

As an act of revenge, his father, who was secretly a S.H.I.E.L.D. agent, tries to infiltrate the Red Room Academy and planted it with explosives. The mission was successful, but it ended with the Red Room finding his father and killing him before Natalia's eyes. After finding out all about the truth about the Red Room and his father's affiliation with S.H.I.E.L.D., Natalia decided to run away and escape the Red Room.

She was tracked down by several assassins but was saved by his father's colleague, Ivan Petrovich, who eventually became his foster father. Growing up, she was trained by her foster father to become highly skilled and an expert of martial arts and acrobatics the same way her mother learned at the Red Room academy.

After Ivan's death at the hands of several Hydra agents who were masquerading themselves as S.H.I.E.L.D. agents, Natalia continued her career as a ruthless assassin and a world-class spy, hoping that one day, she might get her revenge against those who were responsible for her foster father's death.

Later on, she eventually fell in love with Alexi Shostakov, a distinguished Soviet test pilot, where later on, they were able to get married for almost two years. Unfortunately, the Soviet Government intelligence (KGB) decided that the skill set of this couple would make them superb special operatives, and split them up while Alexi was away on a mission. Trained as one of the Soviet Union's first successful super-soldiers, Alexi became the Soviet Union’s answer to the United States’ Captain America, eventually turning him into the Red Guardian.

Natasha was told that her husband died in an experimental rocket crash against the U.S. Government, although he actually survived in reality, and was drafted into the KGB. She became their best operative since she had a long-time experience being trained in the infamous Red Room Academy, becoming excellent at fighting and information gathering. It was there she was first dubbed the “Black Widow.”

This life underwent a dramatic change when she was targeted for assassination herself, and the agent sent to kill her was the similarly gifted soldier, Clinton Barton. Instead of killing her, Barton spared her life and the pair developed a lasting partnership from that moment on. Following Barton, the Black Widow was drawn into a new life as an agent of S.H.I.E.L.D.. Her past, however, would remain a touchy subject for her, and Widow tried to start a new life going by her anglicized name Natasha Romanoff.

During a mission to protect a Nigerian scientist, Romanoff was confronted by the ruthless Winter Soldier, who eliminated his target by literally shooting through Romanoff when she tried to shield him, leaving a small scar on her hip. After this encounter, Romanoff would go on to attempt to track down the Winter Soldier for an unspecified amount of time, but was forced to give up after accepting that he was more elusive than any other enemy she had encountered.

On one mission, Natasha assumes the alias of Natalie Rushman, in order to infiltrate Stark Industries and assess Tony Stark's mental, emotional, and physical states. She assisted Pepper Potts and Stark, under the guise that she was working in Stark's legal department, all the while feeding information to S.H.I.E.L.D. and Nick Fury regarding Stark and his activities.

Having extensive mastery in the martial arts and armed with her Widow's Bite, Black Widow was one of S.H.I.E.L.D.'s most talented agents. When Loki declared war on Earth with the assistance of the deadly extraterrestrial race known as the Chitauri, Black Widow eventually and voluntarily joined the Avengers and helped to defend New York City.

After the Avengers defeated Loki, she continued her work with S.H.I.E.L.D., this time working with fellow agent Captain America. Following the Hydra Uprising, which resulted in all of her morally dubious history being revealed to the world, she dropped off the grid to begin rebuilding her cover. Natasha later rejoined the Avengers, working to bring down various Hydra cells across the world and the rogue artificial intelligence Ultron. Unlike most members of the original roster of the Avengers, Black Widow remained a member of the second incarnation of the team after the events of Ultron Offensive.

As the Black Widow, Natalia possesses no superhuman abilities. Although, because of her abilities, Nick Fury's intel classified her as power level 8.

Same as a normal human being.

Retrieved from "https://marvelcomicsfanon.fandom.com/wiki/Natalia_Romanova_(Earth-61615)?oldid=268559"
Community content is available under CC-BY-SA unless otherwise noted.