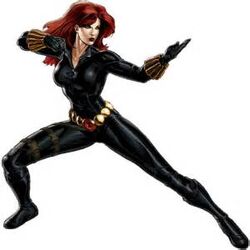 Little is known about Black Widow's life before the Masters of Evil's attack on the S.H.I.E.L.D. USS Alpha Helicarrier. It can be assumed to be similar to her mainstream counterpart.

Black Widow was one of the heroes in the Ultimate Alliance, also serving as Nick Fury's second-in-command. A major subplot involves concern over whether she is a double-agent traitor.

Black Widow was the leader of Bravo team during the Secret War on Latveria. During the Civil War, she stayed with S.H.I.E.L.D. to support the SRA. Widow was also one o0f the many heroes to not escape from Prison 42 during the break out.

While the Super Soldier serum has kept her in her physical prime, its effects on her body have made pregnancy impossible.

Equipment: Synthetic stretch fabric which has been augmented to be highly resistant to damage even small arms fire and high temperatures. Microscopic suction cups on her costume allow her to scale walls and cling to ceilings, just as her namesake. Avengers Identicard.
Transportation: Natasha uses her Widow's Line, a grappling hook with a retractable line, to swing along rooftops for increased mobility. Avenger's Quinjets. Assorted S.H.I.E.L.D. aircraft. Used an Avengers Issue Jet-Pack.
Weapons:

Retrieved from "https://marvelcomicsfanon.fandom.com/wiki/Natalia_Romanova_(Earth-6109.2)?oldid=164299"
Community content is available under CC-BY-SA unless otherwise noted.