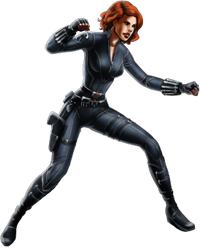 Earth-1315
Base Of Operations
The Triskelion
Characteristics
Gender

Natalia hates to talk about her life prior to joining S.H.I.E.L.D so she doesn't talk about it all that much, she only revealed to her Avengers comrades that she was born in Moscow, Russia and was approached to join S.H.I.E.L.D in 2011.

A few days after joining S.H.I.E.L.D, Natalia met a man by the name of Clint Barton a S.H.I.E.L.D agent who had also joined the same time as her, the two formed a brother/sister bond and went on many missions together, the two eventually received the codenames: Hawkeye and Black Widow which the two liked very much.

Reviving the Fallen Hero and battling the Hulk

In 2012, a year after joining S.H.I.E.L.D. Word went around that the Super Soldier known as Captain America had finally been found and that he had been revived by S.H.I.E.L.D. Natalia was worried since how an old World War II veteran would react to a Russian being on S.H.I.E.L.D. She met Steve Rogers a few hours after his revival and instantly felt a connection with him, she felt "taken" with him. Steve told Natalia that he wasn't a one to judge and welcomed any one to America in open arms. A few days later, Natalia was called upon by S.H.I.E.L.D to accompany Steve and Clint on a mission to stop a big green beast who was rampaging through Manhattan. After arriving in Manhattan, the three already saw Iron Man and Thor battling the beast now dubbed 'Hulk'. After hours of fighting the Hulk, they finally defeat him and see the Hulk was the renowned scientist known as Bruce Banner, they then took him into S.H.I.E.L.D custody.

Starting a relationship with Steve

Steve eventually confessed his feelings for Natalia and she replied "You took your time" and the two shared a passionate kiss, signifying a start of a new relationship.

One day the Triskelion was attacked by unknown superhumans claiming for the blood of their enemies. Steve suited up to battle these foes with Hulk, Steve and Clint, while Fury contacted Iron Man and Thor. Natalia and Steve came across the one known as Baron Zemo, Red Skull's son who wanted revenge for his father's death, Captain America and Natalia battled Zemo but he proved too strong having enhanced strength from his father's Super Soldier formula. Eventually after Hulk launched the Abomination's corpse at Baron Zemo rendering him unconscious and long enough for Captain America to imprison him. Natalia then went on to help, Clint and Thor defeat Loki. After hours of battling the Dark Avengers were eventually defeated and put into S.H.I.E.L.D custody.

Marrying Natalia and birth of Cody

In 2015, Steve proposed to Natasha and the two later married, in 2021 she gave birth to their son Cody Rogers who also had inherited the Super Soldier Serum.

Disbandment of the Avengers

In 2025 after the new President John Damien was elected he made all superheroes illegal thus ending the Avengers activity and leaving Steve and Natalia retired and to raise their son Cody a normal life.

Natasha Romanoff is a high level trained combatant and S.H.I.E.L.D. operative. She is fluent in multiple languages including Russian, Italian, and Latin. She also possesses high level computer training and psychologist training. She is also deceptively strong, though not superhuman. The Black Widow is a master martial artist, an expert markswoman, a natural actress, an infamous seductress, and a gifted veteran spy.

Master Martial Artist: Natasha is an expert in the field of multiple martial arts. Combined with her strength, speed and agility, she was able to take down nearly a dozen of terrorists on an attack in the Triskelion with ease and without being hit at all.

Expert Acrobat: She is an Olympic class athlete, gymnast, acrobat and aerialist capable of many difficult feats.

Multilingual: She is fluent in Latin, Russian, English, French, German, Italian, and various other languages.

Expert Tactician: She is a very effective strategist, tactician, and field commander.

Talented Hacker: Natasha can hack into most computer systems without tripping any firewalls or security.

Master Seductress: She is an expert in the field of seduction. Natasha has been infamously known to bend many different men to her will and sometimes even get them to do her bidding for her. Iron Man is an example and living proof of this.

Expert Spy: Natasha is a dangerous secret agent trained in espionage, stealth, disguise, infiltration, and demolitions. Her talents and years of experience have enabled her to reach a high ranking as an agent of S.H.I.E.L.D.

Deceptively strong, though not superhuman.

Retrieved from "https://marvelcomicsfanon.fandom.com/wiki/Natalia_Romanova_(Earth-1315)?oldid=164298"
Community content is available under CC-BY-SA unless otherwise noted.