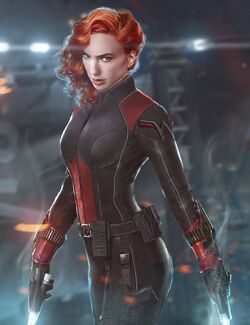 I can think of 32 different ways to kill you right now, so if I were you, I'd start talking. While you still can.

Abducted as a baby by the Winter Soldier, Natalia Romanova was raised in the Red Room. The Red Room was specifically designed by Russians to train young girls to be assassins, capable of blending in anywhere and doing whatever is necessary to achieve their goal.

As she grew older, Natalia became the Red Room's star pupil. She was rivals with another girl named Yelena Belova, who in secret, saw Natalia as a sister and an inspiration to do better. Eventually, after graduating, she was renamed Natasha Romanoff and given the moniker of the Black Widow.

For the next few years she was deployed on numerous black ops missions, and assassinated dozens of targets. She eventually got on S.H.I.E.L.D.'s radar in a bad way, and found herself being hunted by Hawkeye, the world's premiere archer and one of S.H.I.E.L.D.'s best agents.

After an extensive battle, Hawkeye looked into Widow's eyes and saw the pain behind them, and offered to help her. Initially not believing him, she fought back until he dropped his bow and put up his hands. Natasha then began to cry and was taken in by Hawkeye. She was later introduced to Nick Fury, Director of S.H.I.E.L.D., who debriefed her and extended an offer for her to join S.H.I.E.L.D. She accepted on one condition; that she gets to work side by side with Hawkeye.

Hawkeye enthusiastically accepted and they then became partners, completely and totally in synch. They became so famous within S.H.I.E.L.D. that they were treated as legends by their fellow agents. Fury had so much faith in them that when the time came to form the Avengers, he recruited the two of them. They then fought alongside the heroes Captain America, Captain Marvel, Iron Man, Hulk, and Thor, whose brother, Loki, was leading an alien invasion of the Chitauri.

Once the Avengers won the day, they decided to stay together as a team. When the time came for them to leave S.H.I.E.L.D., Black Widow has hesitant. Fury and S.H.I.E.L.D. was the only place she ever felt comfortable calling a home, but after encouragement from Hawkeye and Captain America, she became comfortable moving forward into the next phase of her life.

[[Category: In a Relationship with Clint Barton Characters]]

Retrieved from "https://marvelcomicsfanon.fandom.com/wiki/Natalia_Romanova_(Earth-101)?oldid=250547"
Community content is available under CC-BY-SA unless otherwise noted.