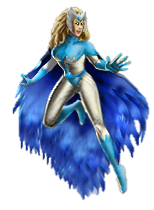 No, Douglas. I am no longer Anne McKenzie. In truth, I never really was. Anne McKenzie was but a figment of one man's imagination. I am Snowbird!

Narya's origins trace back to ancient times when the Eskimo gods of the North battled the mystical Great Beasts for the fate of the world. Ultimately both parties were exiled from Earth, and as such the Eskimo gods sought to create an agent to prevent the Beasts' return. To that end, Nelvanna, goddess of the Northern Lights, mated with a human. With the midwifery assistance of Sarcee mystic Michael Twoyoungmen, Nelvanna gave birth to a daughter, Narya. Twoyoungmen bound the infant to the lands of Canada, allowing her to assume human form; however, she would weaken if she left Canada's borders.

Twoyoungmen raised the rapidly maturing Narya as his own daughter, and she was soon recruited into Alpha Flight as Snowbird.

Arctic Animal Shape-shifting: Snowbird is a shapeshifter able to take the form of any animals native to Northern Canada. Snowbird is able to change into a white-skinned or white-furred version of any creature native to the arctic. She can also transform into a female human being; her true face is not human. When she transforms into an animal smaller in mass and volume than a human being, she becomes a human-sized version of that animal. If she transforms into an animal larger in mass and volume than a human being, she gains mass from an unidentified mystical source. Snowbird gains the special attributes of the animal she takes the form of, such as the enhanced vision of an owl. Snowbird's personality is overlaid with the traits and behavior of the animal she has taken the form of. Over time, the animal's passions risk overwhelming her own self control. If Snowbird stays in one form for an extended period of time, she risks having the animal's psyche permanently overprinted on her personality. Creatures she has transformed into include a swarm of mosquitoes, a sperm whale, a polar bear, a giant arctic owl, Tanaraq (the true form of Sasquatch), a Wendigo, etc. She even transformed into a wolverine and beat Wendigo by ripping him to shreds.

Flight: Snowbird is able to fly in her base form without having to change her form.

Healing: Snowbird can create a healing aura around herself to enable her to recover from injuries. AIM determined that her body has a form of enhanced cellular rejuvenation.

Postcognition: Snowbird possesses the ability to see into the recent past. Through her mind's eye, time literally rewinds itself, and she can perceive events that have transpired within the past six hours in her current location. She can replay events in an area, but only she is capable of seeing them.

Compel Others: Snowbird possesses the mental ability to compel others to aid her in her struggle against the Great Beasts.

Mystical Sense & Resistance: Being a mystical creature herself, Snowbird can pick up and sense various mystical activities from various places. She could detect the presence of magical energies or the breaching of a magical field. She can also resist teleportation.

Snowbird is a fair hand-to-hand combatant, having been trained by both Puck and Wolverine. She has all the knowledge and wisdom of the gods of the Arctic, but due to her young age she doesn't know how to fully use it, as she is technically only a few years old despite her adult looks.

Varies. Snowbird possesses superhuman strength at a level enabling her to lift one ton. When in the form of another creature, she possesses the uppermost strength of that creature.

Shaman's spell cast at Narya's birth bound her lifeforce within the borders of Canada. Snowbird weakened rapidly if she left the boundaries of Canada and prolonged absence could have been fatal.

Retrieved from "https://marvelcomicsfanon.fandom.com/wiki/Narya_(Earth-1010)?oldid=255224"
Community content is available under CC-BY-SA unless otherwise noted.