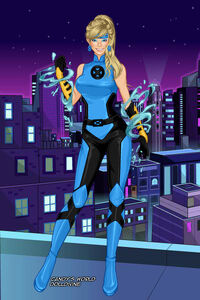 Daughter of Namora and Talan. Namorita was born to X-Men veteran Namora and husband Talan. Talan died when Namorita was three, and she and Namora then relocated to the Institute but stay close to the waters. Eventually, Namora was killed in the ultimate battle and Namorita remained in the care of Mutant Residency Center before she joins the new X-Men team.

Namorita's powers came from being a hybrid of Atlantean Homo mermanus and mutant Homo superior physiologies in which inherited from her mother. Also Namorita is the Princess of Atlantis.

Amphibious Physiological Adaptation: Namorita's body was specially developed for underwater conditions, granting her specialized blood circulation to withstand freezing temperatures and highly developed vision to see clearly even in murky ocean depths. This hybrid physiology meant she could survive indefinitely underwater or on land, though she would still need occasional contact with water to survive.

Aquatic Healing: If injured, Namorita's body could heal damaged tissue faster and more extensively than an ordinary human or most Atlanteans. Namorita's accelerated healing was at its peak while she was immersed in water and diminished the longer she was out of contact with water or if she was completely dry.

Superhuman Strength: Like all Atlanteans, Namorita was superhumanly strong. While Namorita was immersed in water she was capable of lifting 75 tons (although prolonged surface activity could reduce her strength to 33% or lower).

Superhuman Speed: Namorita could run and move at speeds greater than even the finest human athlete. Her speed was greatest, however, while swimming. Superhuman Stamina: Namorita's advanced musculature produced considerably less fatigue toxins during physical activity than the musculature of normal human beings, and most other Atlanteans for that matter. Namorita's stamina, much like her strength, steadily declined the longer she was out of contact with water and would diminish to the point where she only had slightly greater stamina than the finest human athlete. Superhuman Agility: Namorita's agility, balance, and bodily coordination were enhanced to levels that were beyond the natural physical limits of even the finest human athlete. Superhuman Reflexes: Namorita's reflexes were similarly heightened and were superior to those of the finest human athlete. Superhuman Durability: The tissues of Namorita's body were much harder and more resistant to physical injury than those of normal human beings and most other Atlanteans. She could withstand tremendous impact forces, high caliber bullets, falls from great heights, exposure to temperature and pressure extremes, and powerful energy blasts without sustaining injury though it was still possible to injure her. Extended Longevity: Atlanteans aged much slower and lived much longer than human beings with the average Atlantean lifespan being about 120 years. Flight: Namorita also possessed vestigial "wings" on both of her ankles, by which she seemed to fly. As these tiny wings were insufficient to keep her aloft it was theorized that her flight capacity was a mental power akin to telekinesis, and the wings merely assisted in the process of "steering" her flight. Mental Detection: Namorita could sense when her cousin, Namor, was in danger within an undefined radius of herself by perceiving the distinctive mental radiations emitted by him. Acute Hearing: Namorita has sensitive Hearing

Class 75; Namorita can lift up to 75 tons when well hydrated.

Retrieved from "https://marvelcomicsfanon.fandom.com/wiki/Namorita_Prentiss_(Earth-9901)?oldid=225658"
Community content is available under CC-BY-SA unless otherwise noted.