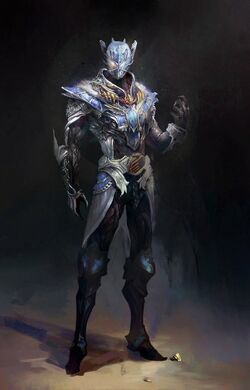 The Kingdom of Atlantis
Universe

This is a surface war. For all I care, you can wipe each other out, leaving the Earth for the water breathers.

Namor was born into royalty, and was destined to one day ascend to the Throne of Atlantis. While still serving as a prince, Namor held a fascination with the surface world, and ended up meeting heroes like the Fantastic Four and Captain America, whom he became good friends with.

However, when Namor's parents were assassinated by the heretic, Attuma, Namor was forced to abandon the surface world and take on his Kingly duties.

Since then, Apocalypse and Ultron have both risen to power. Not wanting to drag his kingdom into an un-winnable war, Namor brokered ceasefire deals with both Apocalypse and Ultron in order to keep Atlantis out of the line of fire and allow them to live peacefully, so long as they don't align themselves with the opposition.

Retrieved from "https://marvelcomicsfanon.fandom.com/wiki/Namor_Navarro_(Earth-9999)?oldid=245613"
Community content is available under CC-BY-SA unless otherwise noted.