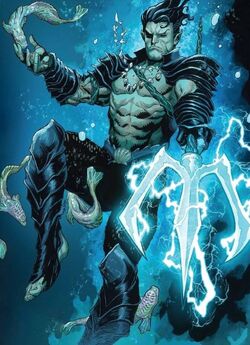 I hope the lights of fair Atlantis are bright to this day on forward... Very, very bright!

Namor Mckenzie was born at some point in the early 1940s to Leonard McKenzie, a American human captain of the sail ship known as the Endurance, and Fen, the beautiful but fierce princess of Atlantis at the time until she eventually became the next queen. His birth name means "Avenging Son." In his chilhood as the destined Prince of Atlantis, Namor had only spent his boyhood playing with his known cousins, including Namora, Byrrah, as well as his good friend Meranno, not knowing where half of his true paternal heritage came from throughout his younger days, as a symbolic bridge between the surface and ocean world.

By the time of his middle adolescence, he and his fellow trained warriors were courageously fighting off the incoming underwater Nazi forces during World War II, sent by a cruel and sadistic Nazi head geneticist and researcher named Nosferatu, from entering their hidden kingdom, when an oil rig explosion and its subsequent spill had also greatly attracted the attention of Namor, who was already in a romantic relationship with a young woman he had met for a long while, who unfortunately had died later on due to the same human-made disaster that he failed to prevent from worsening.

With it, the kingdom of Atlantis has suffered a great loss after the brief but brutal battle sadly resulted in the deaths of hundreds within the kingdom, both the defending warriors and the innocent residents alike (including some of Namor's own cousins and other relatives), despite having to successfully protect the entirety of Atlantis until the very end of the Nazi's attempted assault to invade the mythological ocean empire.

Following the series of interconnected incidents that has unexpectedly occurred to him and his fellow people, Namor eventually grew up distrusting most of the surface dwellers, having been consistently fueled with hatred and rage towards the latter for their reckless and irresponsible actions on the bodies of water across the entire globe, something the humans were supposed to be protecting instead of destroying in the first place, or so did the Atlanteans had thought at first.

At some point in time during the later days of the Cold War, Atlantis was unexpectedly attacked by a group of mysterious surface intruders led by a Russian marine biologist by the name of Lemuel Dorcas. Fortunate enough for Namor and the defending Atlanteans, the latter got themselves an helpful aid from the surface world in the form of an efficient and noble S.H.I.E.L.D. tactical unit, led by General Nick Fury and the famous military squad since the second World War, the Howling Commandos themselves.

Death in the Family

Despite all the altercations both sides had against at first, they still decided to join forces as Namor was strongly convinced that he was willing to do whatever it takes, even negotiating with the surface dwellers, just to keep his people and kingdom safe from the larger threat, that is the Dorcas and his enhanced army of mutates. After several battles solely for the sea empire, the side of Atlantis remained victor against their attempted invaders, only to cost the lives of fearless warriors, including Namor's own mother, Queen Fen herself when she sacrificed her life just to prevent her own son from getting killed at the hands of Dorcas' right-hand man, the ferocious and bloodthirsty Tiger Shark.

Fueled by rage and vengeance, Namor almost killed the ruthless mutate for the unexpected death of his mother if it wasn't for Fury to come and stop him, reminding him that killing wouldn't solve anything but prove Tiger Shark's ideology that Atlanteans were nothing but merciless savages and that there are other ways to bring him and his comrades to justice for their actions, aside from simply killing them a cruel act of punishment. Knowing that Fury was right, he had no other choice but to resist his extreme anger and temptation by handing them over to the authorities of the surface dwellers, courtesy of S.H.I.E.L.D., instead of having them executed.

With the death of Queen Fen, a grieving Namor eventually finds out that she had left a message to her son, revealing that she was already supposed to anoint him as the next monarch of Atlantis even before her unexpected demise, along with her finally telling him posthumously, about his true origins that his father was a surface dweller by the name of Leonard McKenzie, much to Namor's great surprise after discovering his true heritage. During the day of his royal coronation as the succeeding king of Atlantis, Namor decided to have the throne handed to his cousin Namora in the meantime, realizing that he had to search for the mysterious man who was his father instead, someone whom he never knew was still possibly alive for a very long time.

In the midst of his search for his long lost father in the surface world, Namor unexpectedly crossed paths with the heroic explanatory team of cosmic adventurers known as the Fantastic Four, who discovered a mysterious interdimensional portal within the core of Atlantis' main domain, on his way to return to Atlantis. This portal would be something that they would later fully discover to be a gate through several dangerous and plain deadly dimensions across the known multiverse, including the shortcuts to the rest of the Seven Seas, although the one Namor was fearing the most was the realm full of lost and terror that was the Negative Zone.

With Atlantis impulsively clashing the Fantastic Four instead of helping them solve the elephant in the room since they first believed that they were a threat, Namor later realized that he and his people were actually fighting against the wrong side, to which in response, he finally convinced his people into joining forces with the surface heroes' cause to prevent the upcoming, larger threat of the Annihilation Wave, as their supreme leader, Annihilus attempts to get his massive and ravenous forces through the interdimensional gate and spread their conquest to establish a new territory in the prime reality, starting with planet Earth.

As the bloodthirsty Annihilus unleashes his hungry forces to raid the Seven Seas, the combined forces of Atlantean warriors and the Fantastic Four counteracted their every deadly and brutal attack, which unfortunately had taken the lives of noble ocean-dwellers who risked their lives for the future of Atlantis. Eventually and thankfully, the chaotic battle for Atlantis has ended with heroic victory, forcing Annihilus and the remainder of his surviving minions to retreat, bidding the Fantastic Four some time to close the Atlantean interdimensional gate, an accomplishment that further enrages Annihilus, fearing that he may never find a way to fester the prime universe ever again.

Ever since that life-changing moment came to Namor's life, the slow but continuously growing foundation of his optimism and great trust to have a unified future with humanity and the surface world has now begun to be molded, all thanks to the introduction of the Fantastic Four. From time to time, Namor eventually became situational allies with the Fantastic Four, along with the rest of Earth's mightiest protectors, later on during the rise of heroes in the modern era, whenever they may be needing his help and vice-versa (e.g. the times whenever Namor would often seek for the four to help him find his mysterious father), as long as the kingdom of Atlantis would be out of trouble, kept in the safest of hands of his own native Atlantean people, the only people he still, and would (possibly) always truly trust.

Mutant/Atlantean Physiology: Namor's powers come from his being a unique hybrid of Atlantean (Homo Mermanus) and mutant (Homo Superior) physiologies. Because of his unusual genetic heritage, Namor is unique among both ordinary humans and Atlanteans; he is sometimes referred to as the "world's first mutant," because, while the majority of his observed superhuman powers come from the fact that he's a hybrid of Human and Atlantean DNA, his ability to fly can't be explained by either side (Atlanteans are an off-shoot of "baseline" humanity). He has been stated to be an Alpha-Level Mutant.

Retrieved from "https://marvelcomicsfanon.fandom.com/wiki/Namor_McKenzie_(Earth-61615)?oldid=267120"
Community content is available under CC-BY-SA unless otherwise noted.