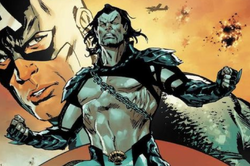 Earth-128108
Base Of Operations
The Outside
Characteristics
Gender

I will not stop until every world in the multiverse bends to my will, and not even you can stand in the way of that.

Namor was born in Atlantis, but grew up in Florida, where he was relentlessly bullied for his gills, which is what developed his hatred for humanity. After turning 18, he found his way back to Atlantis and took control of the Kingdom, using its armies to take revenge on the surface world. He was met with opposition from the Avengers, led by Captain America. After years of war, Namor gained the upperhand and ended up drowning the entire world, leaving only a handful of surface dwellers alive, constantly sailing the open ocean in the hopes of avoiding the Atlantean forces. These humans were, of course, led by Captain America.

Namor would later be recruited into the Renegades by The Outsider under the promise that if he returned to his home reality that global warming would take its toll, burning up Namor's oceans and restoring the surface world. Unwilling to let this fate befall his kingdom, Namor agrees to join the Renegades. After serving with them for several missions, he became enraged when Odin was placed on the team and instantly took control. Namor was the first to stand up to him, and paid with his life when Odin pulled out his insides.

Being Separated from Water for too long

Retrieved from "https://marvelcomicsfanon.fandom.com/wiki/Namor_McKenzie_(Earth-128108)?oldid=244571"
Community content is available under CC-BY-SA unless otherwise noted.