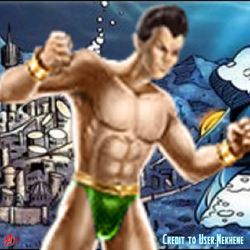 In 1915, Ernest Shackleton, sent by Winston Churchill, sought out Vibranium in the Antarctic. His ship, the Endurance, was lost. Later, Leonard McKenzie, with the telepath Paul Destine as a passenger, attempted to recover the Vibranium. Princess Fen was sent to investigate explosions near the surface by her father, King Thakorr. McKenzie met and impregnated Princess Fen with the child who became Namor. Soldiers commanded by General Krang attacked McKenzie's crew. McKenzie himself did not die, though he did not recognize Namor later when he first learned of his son's rampages in New York.

The child was named "Namor" which means "Avenging Son". Namor spent his boyhood taunting his cousin Dorma, as well playing with his other cousins Namora and Byrrah as well as his friend Meranno. An oil spill in 1936 attracted the attention of Namor, who began a relationship with a young woman named Sandy. Namor grew up distrusting surface dwellers.

He was sent to New York after divers were found near Atlantis. However, it was revealed that the divers were Nazis, and Namor joined the Invaders, fighting in World War II alongside men such as Captain America and the android Human Torch (in addition to his solo missions), and later the All-Winners Squad to oppose the Axis. Namor would at times battle, then befriend the democratic societies of the surface; the explanation for this later discovered to be temporary insanity as a result of too much time spent away from the sea. For the most part, however, the Sub-Mariner set his sights on Nazi Germany and Imperial Japan. The Atlanteans became involved with the Axis-created Human Torch duplicates the Firebrand Squadron. One Atlantean, his friend Meranno, became an Axis agent as the U-Man.

In the 1950's Namor attempted to gain recognition for Atlantis, only for bigots to cause the death of a man named Truffaut. Namor disappeared in 1958 after Destiny, the same Paul Destine who had voyaged with his father, attacked Atlantis.

Atlantis was relatively unharmed during the war but soon greatly damaged by powerful earthquakes. Princess Fen and King Thakorr were killed. Paul Destine, who had ordered the explorers on McKenzie's ship to find the 'Helmet of Power' (actually Set's Serpent Crown), was causing them. He used the crown to turn Namor into an amnesiac, living as a derelict in various flophouses. Coincidentally his former teammate Bucky was also briefly sleeping in the same flophouse. As both men had amnesia, neither man recognized the other.

Namor remained as derelict until Johnny Storm, the third Human Torch, happened to find him in a flophouse and saw him use his super-strength. Johnny felt bad for the amnesiac and offered to help him get back on his feet. He shaved the "bum" with his flame, revealing Namor's true features. Johnny then dumped Namor into the river, successfully restoring Namor's memory. Unfortunately, Namor tried to return to Atlantis, but found an outpost that had been destroyed by nuclear testing during the years he was an amnesiac. He assumed that all his people were scattered where he would never find them.

He immediately vowed vengeance on the surface world and attacked it, using the giant sea monster Giganto. The Fantastic Four were able to stop the Sub-Mariner. During the fight, he became instantly enamored of Sue Storm, and offered to make her his bride, and after that, his queen. Namor carried the romantic crush with him for years and she even reciprocated the feelings for awhile, which first became apparent when Namor teamed up with Doctor Doom to destroy the Fantastic Four.

Namor also joined the Hulk in an attack on the Avengers, but was repulsed when the temperamental Hulk left the fight. After the battle, Namor stumbled across the still-frozen body of his wartime comrade, Captain America, which was being worshiped by a far-flung Inuit tribe. Enraged, the Sub-Mariner threw the ice block into the ocean. The Avengers happened upon Rogers' thawing body, and soon revived the legendary hero. Even though he had been their enemy, he had won the Avengers' respect. When the team's original members took a leave of absence, they approached Namor to offer him a place with the Avengers, but he refused.

Shortly thereafter, Magneto approached Namor and asked him to join his first Brotherhood of Evil Mutants. Namor fought against the X-Men in a battle alongside Magneto, but refused to kowtow to the Master of Magnetism and ultimately rejected the offer.

Once Sebastian Shaw was in search for a new person for the title of the White King of the Hellfire Club. He made ​​a party to which he invited the most influential men in the world and trying to decide who is better fit for this position. Rejecting the candidacy of Tony Stark, he choose Namor, and invited him to join the Club. But Namor contemptuously rejected the proposal, saying that if Sebastian once again dare to waste his time on such a minor thing, he will kill him. This led Shaw into a frenzy, so he ordered Emma Frost to force Namor to join the Club, no matter what the cost. A few days later, she acted out a suicide by jumping overboard a yacht to attract Namor's attention. He rescued her and they spent together two weeks in the Atlantis. Shaw, however, tired of waiting for news from Emma, ​​thinking that Namor killed or captured her, he decided to sent the Hellfire Club members for her. They attacked Namor and Emma and caused damage to Atlantis, and Namor took this as a declaration of war. Finding where the Club Members came from, Namor, along with Emma, went there and clashed with Shaw, Donald Pierce and Selene. Selene mind-wiped Emma, to erase the memories of her betrayal and make her loyal to the Club again. Surrounded by two telepaths, Shaw explained to Namor that he would never get close enough to kill him. Namor left, but vowed to take revenge one day.

Mutant/Atlantean Physiology: Namor's powers come from his being a unique hybrid of Atlantean Homo mermanus and mutant Homo superior physiologies. Because of his unusual genetic heritage, Namor is unique among both ordinary humans and Atlanteans; he is sometimes referred to as "Marvel's first mutant," because, while the majority of his observed superhuman powers come from the fact that he's a hybrid of Human and Atlantean DNA, his ability to fly can't be explained by either side (Atlanteans are an off-shoot of "baseline" humanity).

He has been stated to be an Alpha-Level Mutant.

Flight: Namor also possesses vestigial "wings" on both of his ankles, by which he seems to fly at the speed of escape velocity when exerting himself fully. His flight speed at "normal" levels is enough to enable Namor to fly faster than military aircraft. Since the "wings" by themselves could never carry Namor, it has been speculated that he uses the wings for steering and flies in some other manner, perhaps by telekinesis. Namor's ability to lift weights when flying is sufficient to enable him carry a fifty ton anchor with one hand without a discernible loss of speed/momentum.

Water Emission/"Sprinkler System": Namor displayed the ability to extinguish himself when set alight, water spraying from his skin in a manner explicitly likened to a sprinkler system.

Aquatic Life Mimicry: The Sub-Mariner has the ability to mimic the characteristics of all the undersea creatures. Some of the abilities he has demonstrated are:

Expert Combatant: Namor's extended lifespan and his involvement in numerous conflicts both under the sea and in human wars have granted him a great deal of experience in hand to hand combat. Growing up, he demonstrated natural skill in both armed and unarmed combat and likely received extensive training in both later on. He is a master swordsman, marksman, and is capable of wielding other weapons such as spears but rarely does so due to his preference of hand to hand combat.

Expert Tactician He is a highly accomplished tactician.

Skilled Engineer: He is adept at designing and improving Atlantean technology.

Talented Business Executive: Ever since he was a teenager, he proved to be very adept in the field of business as it came easy to him.

Due to his mingled bloodline of Atlantic and Human breeding a number of natural dependence and unique vulnerabilities has occurred.

Water Deficiency: When not exposed to water, many of Namor’s physical attributes gradually decline and can reach a point where he possesses only a small fraction of his powers. Namor's strength, stamina, and durability are affected most and, at their minimum known level, are much closer to the levels possessed by the vast majority of other Atlanteans. Renewed exposure to water will immediately restore his abilities.

Oxygen Imbalance: Namor has demonstrated a vulnerability to oxygen imbalance when remaining too long in either water or air, resulting in manic-depressive mood swings.

Dehydration: Very powerful heat-based attacks are somewhat of a concern, as they cause dehydration; causing his body to dry faster, and weaken at at a accelerated rate.

Pollution: If Namor is immersed in or exposed to polluted water, it can have a negative effect both on his physiology and the efficiency of his physical attributes.

His sprite in his profile picture was made by User:Nekhene in Marvel Avengers Alliance Wiki

Retrieved from "https://marvelcomicsfanon.fandom.com/wiki/Namor_McKenzie_(Earth-1010)?oldid=258388"
Community content is available under CC-BY-SA unless otherwise noted.