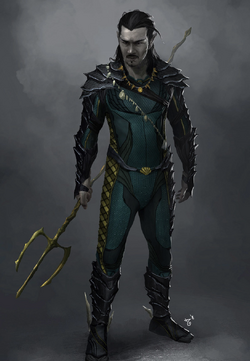 The people on land see me as a freak, the people underwater see me as a pariah. I am a man of two worlds, neither of which I can truly call my home.

When the sailor, Leonard McKenzie, accidentally discovered the Atlantean Princess, Fen, washed up on land, the two of them fell in love and sired a child. However, before he could be born, Fen was ushered back to Atlantis, forever separating the two of them.

When Namor was born in Atlantis, the people believed him to be an abomination and exiled him from the Kingdom. Namor was then forced to raise himself in the wide open sea, eventually discovering his ability to survive on land as well. This led to his search for answers, and he discovered his father sacrificed his life during World War 1.

Around this time, the world had found itself in World War 2, and Namor threw himself into it to help defeat Hydra, especially on the waterfront where they had experimental drilling plants. Namor eventually found himself working alongside Captain America and the Howling Commandos. The war eventually led him to return to Atlantis when Hydra tried to pillage the nation for its resources.

He was able to save the Kingdom and earn his citizenship back. However, he rejected Atlantis and decided to make a home for himself on land.

Unfortunately, not long after the end of the war, one of the remaining Hydra factions captured him and erased his memory in an attempt to weaponize him. However, his power was too great for them to subdue him, and he was able to escape, wandering the streets as a seemingly immortal homeless hermit.

It wasn't until the modern day, after the Fantastic Four became a premiere super team that Namor started getting memory flashes. The Human Torch in particular reminded him of the Howling Commando of the same name, the android Jim Hammond, who Namor always had a rivalry with. He became enraged and drew the attention of the new Human Torch and his sister, the Invisible Woman. After a confrontation on the pier, Namor was knocked into the water, which instantly restored his memory.

Now capable of remembering everything from his past, Namor became vengeful and engaged in battle with the whole Fantastic Four, and found himself enamored with the Invisible Woman. This resulted in a rivalry forming with her husband, Mister Fantastic. Although eventually, the Four came to understand Namor's plight and offered to take him back to Atlantis.

Slightly hesitant to accept their offer, Namor eventually ended up returning to his home, wishing to make amends. Once there, he discovered his nation impoverished and in turmoil. He felt it was his duty as a member of the royal bloodline to lead Atlantis into the new age, and was crowned the King.

Retrieved from "https://marvelcomicsfanon.fandom.com/wiki/Namor_McKenzie_(Earth-101)?oldid=250446"
Community content is available under CC-BY-SA unless otherwise noted.