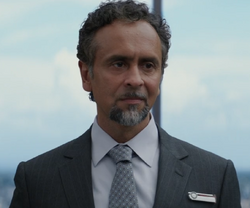 Considering this attack took place one mile from my country’s sovereign waters, it’s a bit more than that. I move for immediate hearing."
"We don’t need hearings, we need action. It’s this Council’s duty to oversee S.H.I.E.L.D..

Singh gained a seat on the World Security Council following the Battle of New York, and, with the rest of the council, coordinated with Alexander Pierce and Nick Fury to develop a stronger role for S.H.I.E.L.D.. To that end, they created Project Insight.

Nick Fury used your friendship to coerce this council into delaying Project Insight. A project he knew would expose his own illegal operations. At best, he lied to you. At worst…

Singh, along with the rest of the council, was called to the Triskelion by Pierce to witness the launch of Project Insight. When Pierce was exposed by Captain America as a part of HYDRA's infiltration within S.H.I.E.L.D., STRIKE, entirely composed of HYDRA members, held the Council hostage, until Black Widow who had been disguised as Councilwoman Hawley took the HYDRA operatives out.

Let me ask you a question: what if Pakistan marched into Mumbai tomorrow, and you knew the they were going to drag your daughters into a soccer stadium for execution. And you could just stop it, with the flick of a switch, wouldn't you? Wouldn't you all?"
"Not if it was your switch.

Pierce attempted to reason with Singh, citing what would happen if Pakistan invaded his country India, but Singh did not accept his reasoning. Eventually, Pierce pressed a button on his phone and the security badges on the council members' chests exploded, killing them.