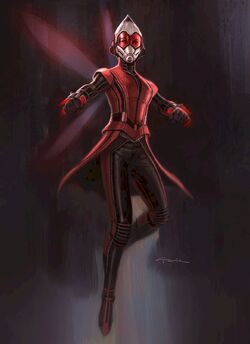 Did you know? If you had just followed my lead, you would have never been caught... So the fault's clearly on you there...

Born in the early 1990s, the girl that would be named Nadia Saviuk was born to the late Maria Trovaya and Hank Pym, though the latter wasn't aware of their daughter's existence due to the former wanting to make the life-changing revelation a surprise for him after keeping it for almost nine months, thanks to her cryptic pregnancy belly which even Hank didn't notice. Unfortunate for the newlywed couple, they were attacked by a hitman while on their honeymoon in Hungary. In the assassination attempt, her mother sadly died, which was the primary target since Maria was considered a great threat to most of the Hungarian organized crime due to her highly-influential activist status both in the United States and in their homeland.

However, unbeknownst to Pym at the time, the hospital that kept Maria's lifeless body had found out that she was pregnant at the time, and thankfully, they were able to save the infant through delivery before it was too late. The baby was safe and healthy, but due to the later fact that the doctors had discovered that she's a mutant, having suddenly secreted insect eggs as she cried under distress. As most of the world would react to a mutant at the time, the staff at the hospital who took care of the infant's delivery felt nothing but fear and disgust for the child, that the superiors decided to keep the discovery of the infant from Hank Pym until he left Hungary in immeasurable grief without knowing the truth.

In the midst of the mutant hysteria throughout the hospital, one nurse by the name of Sasha Saviuk had genuinely cared for the orphaned and abandoned infant, feeling sorry that no one would acknowledge her for who she really is: an innocent baby. When the word about the mutant infant had reached to the government, Sasha decided to hide the infant and take it as her own, saving the infant from the hands of any government agency or form intelligence who were sent to inspect the hospital in search for the baby after she hid it inside he own apartment and took the baby under her own care. Due to Sasha's act of courage, the baby now named as Nadia was raised and nurtured in a loving environment. When Nadia was still a child, Sasha met and fell in love with a foreigner named Lonnie Lincoln, who unbeknownst to her was a wanted criminal in the United States known as Tombstone.

A Life of Crime

However, as all good things must come to an end, Sasha and Nadia's time did due to their unnerving circumstances, and after finding out both Sasha "abducting" Nadia and Lincoln's identity in his homeland as a startup crimelord and former mob enforcer, the two had no other choice but to leave Hungary, back into America, wherein Sasha and Nadia had no other choice but to emigrate there into safety, not knowing that the two had to bear the life of Lincoln's busy career as a crimelord in the rise in the community of Harlem, New York City. Nadia was legally renamed as Janice Nadia Lincoln, though she still preferred Nadia as her name as it was given by her mother (who also changed her name to Shay), and grew up in the crime and poverty-ridden borough of the complicated city that never sleeps with her parents.

Life on Harlem was tough, but Nadia was raised and trained by her step-father to be the toughest there is in order to survive her new home. By the moment her mutant abilities resurface in the form of her emerging wings, Tombstone couldn't be more impressed rather than feared, which she expected the latter would be his reaction. While Tombstone was beginning to be one of his greatest assets for his organized crime, Nadia's mother Sasha was appalled by the true nature of her lover, which she threatened to leave with Nadia if he only gets her involved with his own criminal machinations. Lincoln was distraught by his lover's after she accused her of using Nadia as a living weapon, but he argued back that he truly adored and accepted her for who she is: a mutant.

Sasha tried to leave with Nadia when she was in her late teens, but the principles Lincoln had already changed her growing up, thus making her own decision to stay with her step-father. Lincoln felt proud yet guilty, which he initially denied, but agreed with Sasha's persuasive plea to never involve her in his life of crime but it was too late. Sasha told Nadia that she and Lincoln were neither of her biological parents, but Nadia couldn't care less, having developed her bond with the both of them. Sasha left in bitterly accepting that her daughter had fallen into the influence of her now former lover, but still hopes she could have a change of heart one day before the heroes and authorities catch and stop Tombstone's organized crime.

Nadia nevertheless grew up a somewhat of a normal life with Tombstone in and out of her life, mostly showing up to help out with bills and schooling, which only tempted Nadia to learn and excel for the sake of helping her father in his blooming "business" of crime, which is now often rivaled with the heroics of Luke Cage, Harlem's Hero. Nadia was a natural genius (not knowing she got the trait from her biological father), and she was able to graduate college earlier than most people as a biochemist, in relations to knowing more about her secret nature as a mutant, much her peers' astonishment and her rivals' envy.

After graduating, she immediately put her genius mind into not so good use, as she really helped her father's facade business in Harlem and many other branches in New York City, finding herself frequently affiliated with other organized crimes and syndicates, most notably Kingpin's secret empire. As father and daughter, the two had a rewarding yet unfortunately conditional relationship as Nadia helped her father run his crime by discreetly selling and trading different tech (from different foreign materials such as Chitauri tech retrieved from the Battle of New York) and weapons of her design with other organized crime. Seeing the effectivity and proficiency on her tech, Nadia was also inspired by her father to craft her own suit in order to use her powers and help the organization. Reminiscing of the times she was dubbed the "queen of her classes" throughout the years, Nadia named her moniker as the Red Queen, becoming a secret enforcer for Tombstone's Gang, a thief, and sometimes a mercenary-for-hire, proving through the Red Queen's legendary and unbelievable reputation the common proverb that someone's size shouldn't be underestimated, but rather their dedication and performance.

In the aftermath of Ultimate War, Tombstone's Gang began to have a difficult time adjusting with the underground crime community across New York, as their greatest clients, especially Kingpin, had a fallout after participating in the now defunct Movement who were dismantled by the heroic Ultimate Alliance. As a result, Tombstone's Gang resorted to dealing with rare substances and materials which they retrieved in the ruins of the war, in order to survive. One of their were the late Darren Cross' Pym Particles, which Nadia immediately examined to be unstable compared to the original one used by the size-changing heroes who were often seen all over the news, media, and anywhere else in the internet.

Nadia suggested her father that she could fix the Particles into a more stable one but out of sheer desperation to pull out their organization from impending decline, her father rebuked her professional advice and simply mass-produce the subatomic substance to keep the business going. Having no other choice, Nadia had to comply with Tombstone's orders following a certain deadline, reverse-engineering and producing the particles in weeks. In Tombstone's business-minded confidence, the business did bloom in their standards, though his hubris was eventually discovered by the very scientist who discovered the Pym Particles, Hank Pym.

When Pym himself and the Ant-Man banded together to stop their business after they suddenly discovered their illegal transactions across the country, the two went to Harlem and faced Nadia, finding out her affiliation with a small organization that mass-produced the new Pym Particles and illegally sold it for profit. Hank and Scott would later discover that Nadia was the step-daughter of Tombstone. But as the situation was already as it was, Hank would be overwhelmed later on to find out as the Red Queen's adoptive mother Shay personally revealed Nadia was his lost biological daughter with his first and late wife, Maria Trovaya, Nadia's biological mother, having to first adopt her when Shay was still a nurse at a hospital somewhere in Hungary.

While Scott was focused to take down their adversaries, Hank was distracted at the moment, as he could only feel extremely uneasy to process how such an impossible yet real situation as this could happen. While it was fortunate that Hank and Scott have thwarted the further production and transaction of the replicated Pym Particles across the country by the end of their mission, with the last second help of their daughter who had a change of heart, the conflicted Nadia still wasn't prepared to reconciled with her old man, considering how different she was growing up without him, seeing herself as someone beyond saving or redemption.

Pym respected his daughter's decision to give herself some time for herself whether she'll be coming home to him, or remain living as a lone irredeemable criminal, since that her local authorities are now after her, which Hank assured his support that he would be protecting her at all costs. Nadia was genuinely grateful by her father's over-protectiveness, but she nevertheless went on her own terms in the meantime, much to Pym's sorrow. Unbeknownst to Pym and Lang, another reason she didn't was the fact that Nadia is a mutant, believing that it would only overwhelm and surprise her father and her would-be-step-mother Janet van Dyne, whom Nadia confessed adoring as the Wasp, despite Nadia becoming a criminal.

While in hiding from the authorities, she fled New York City, and flew all the way to San Francisco, wherein she decided to join Scott Lang's security company, X-Con Security Consultants to his surprise, since Nadia wanted to find a way to "redeem" herself due to her past crimes. When Scott began to look out for Nadia with suspicion and the two developed a love-hate relationship, only for her to truly get interested in him, and vice versa, as they got to know each other, with Scott even accepting Nadia's nature as a mutant after he accidentally found out one of her "odd habits." The two eventually got romantically involved with each other, which mostly Scott had to keep Hank from finding out that Nadia is staying in their office, and the fact that the two is irresistibly entangled with one another.

Mutant Physiology: Nadia is a mutant whose mutation naturally granted her a number of behaviors and insect-like traits similarly to the very powers and abilities her father and step-mother had achieved with the Pym Particles. Unlike the enhancements given by the particles, however, Nadia has a few notable side-effects, Janet had some insect-like behavior such as eating insects, being fond and attached to (especially beetles), and vomiting laying various insect eggs (when under distress), which most find extremely strange whenever some of them got the chance to spot her unusual habits.

Retrieved from "https://marvelcomicsfanon.fandom.com/wiki/Nadia_Saviuk_(Earth-61615)?oldid=266962"
Community content is available under CC-BY-SA unless otherwise noted.