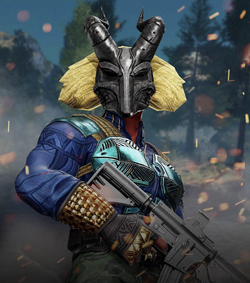 N'Jadaka was born to Wakanda's Prince N'Jobu and an American woman while he was under cover in Oakland, California. Raised under the name Erik Stevens, he was told stories of his homeland Wakanda, and promised that one day his father would take him. However, this proved to be untrue, as N'Jobu had been secretly selling Vibranium, and ended up murdered by his own brother, King T'Chaka.

Erik was eventually able to uncover the truth, and began scheming to one day get to Wakanda and exact his vengeance for his father's death. He joined the US Army right out of High School and quickly began racking up kills, earning himself the nickname Killmonger.

He eventually formed an alliance with known Wakandan fugitive Ulysses Klaw, eventually betraying him and using his body to gain entrance into Wakanda. From there, he revealed the truth about himself and challenged his cousin, King T'Challa, to a trial by combat. The contest ended up being interrupted, and Killmonger was forced to begin rallying Wakandan renegades behind him to try and stage an uprising.

A great war of Wakandans then broke out, and Killmonger and Black Panther found themselves locked in battle once more. However, the Black Panther proved to be too powerful, and Killmonger was badly beaten, but his cousin refused to let him die. He was healed and imprisoned, and receives constant visits from his cousin, who attempts to help him redeem himself.

Retrieved from "https://marvelcomicsfanon.fandom.com/wiki/N%27Jadaka_(Earth-101)?oldid=250764"
Community content is available under CC-BY-SA unless otherwise noted.