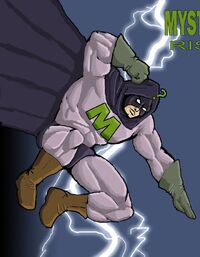 I am the Symbol this Town Needs,

Kenneth McCormick grew up in an extremely poor family. One day, He noticed that crime rate was going up in his town so he desided to do something about it. He became very famous in his town, thus becoming a symbol for his town. Because of envy, another was attempting to become a superhero as well, who called himself The Coon. Knowone knew who he was either, but was believed to be famous comedian and actor Bruce Vilanch. Shortly After, Mysterion went up against Professor Chaos and General Disarray, who were threatening to blow up a hospital if Mysterion dosen't reveal who he is. Mysterion was nearly defeated by Professor Chaos but was saved by The Coon (Bruce Vilanch). The Coon convinced Mysterion to reveal himself to the public. He was then arrested for being a vigilante. Later in jail, They revealed that the Mysterion that was arrested wasn't the real Mysterion. It revealed to be the local jew, Kyle Broflovski posing as Mysterion. The real Mysterion then came to see how hes doing and to thank him for covering for him. At that point, He reveals his face to Kyle.

One Year later, Mysterion joins a Superhero League called "Coon and Friends" which was started by The Coon. They were attending there first meeting until they realized on the television that there was a fire downtown in an apartment building. The team was ready for action until another Superhero called Captain Hindsight showed up and told the firestation "what they should've done". The fire department then left without saving the people in the building, thus killing 14 people. Shortly After, a global oil company, BP drilled a hole into the gulf. The Coon called his members to action, until Captain Hindsight comes in and tells tham what they should have done to prevent it. BP made an I'm sorry video and renamed their company to DP. although they drilled again, thus opening a portal to another demention. Meanwhile The Coon tries to get Captian Hindsight on the team but Mysterion and the others disagree with The Coon's decisions and says the need to worry about the gulf spill. The Coon ignored them and beat up two of his own team members. Shortly after, Mysterion and the rest of Coon and Friends kicked The Coon off the team. Meanwhile, DP drill a hole on the moon which summon the Dark Lord Cthulhu to arise.

Mysterion and The Coon and Friends set up a Lemon Bars sand, using the money to help to people in the gulf. But Mysterion notices one customer who tells his team that they can't stop Cthulhu. Mysterion then suspects him to be in a cult who worships Cthulhu. The team goes back to the base and see's its a mess and trashed. Mesquito, a member of Coon and Friends suspects The Coon did it but Mysterion realized whoever did it was looking for something. Then Captain Hindsight pops up right behind them holding a gun and booze trying to find a picture of him and Courtney Love having sex, which the Coon used to blackmail him. Hindsight didn't know if he should shoot or not, but then Mysterion taunted him, trying to make Hindsight shoot him. Hindsight complaigns that his powers are making him go crazy and dosen't want it anymore. Mysterion then tells him that he has a power that makes his look like nothing. He then explains that he can't die, that he was killed hundreds of times but always comes back. Later Mysterion has his teamates research about the Cult of Cthulhu. Then sees that a bunch of members of that cult were arrested 10 years ago. One of the members notices that one of the pictures on the cults arrest was of Mysterions parents. Mysterion goes to his parent (unknown that its their son) and tries to get answers from them. His parent claim to not know anything due to them being really drunk. Mysterion says that its not hard to believe at all. The team goes to the cult and sees familiar faces attending the cult meeting. Mysterion trys to get answers from the Goth kids who attended the meeting and trying to find out what will happen. The Goth Kid explain that Cthulhu will rule Earth and make the world full of hate, war, and darkness. Two other cult members then come in and tells the Goth kids to kill Mysterion. The Cult Leader then took out a knife and stabbed Mysterion, which kills him but wakes up the next morning.

Apparently, Kenny's Parent's went to a cult meeting before Kenny was born. A Curse was brought up by Carol McCormick and her son Kenny. Kenny's curse was dying over and over but always coming bsck the next day. Basicly he has the power of Immortality.

Constant Resurrection after every time he dies.

Mysterion had Kyle Broflovski pose as him so his identity is secret.

Retrieved from "https://marvelcomicsfanon.fandom.com/wiki/Mysterion_(Earth-1090)?oldid=164297"
Community content is available under CC-BY-SA unless otherwise noted.