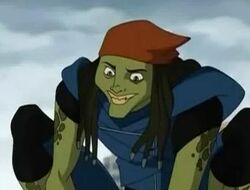 Uhhh, I think we can all agree that we're more likely to win this fight if I'm not involved.

Morty Tolensky's mutation was visible from a very young age, which led to him becoming an outcast and a pariah. He lived on the streets for years, fending for himself, and earning a reputation as the "Toad Boy".

He never knew why he was so different, but he discovered the truth when he was approached by Mystique, who told him about mutants. She extended an invitation for him to join the Brotherhood of Mutants on Asteroid M, which he accepted, and instantly became very subservient to Magneto, which quickly got on his nerves.

Toad ended up earning a reputation as the worst Brotherhood member, as he was constantly getting caught and imprisoned. This led to the Brotherhood getting tired of rescuing him, eventually opting to let him remain in the Raft.

Retrieved from "https://marvelcomicsfanon.fandom.com/wiki/Morty_Tolensky_(Earth-101)?oldid=255267"
Community content is available under CC-BY-SA unless otherwise noted.