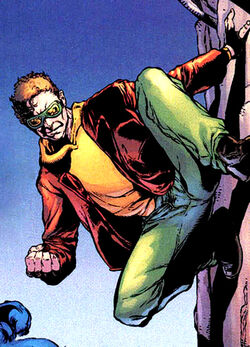 Yeah... Just keep underestimating me, sh*thead... You know, I can just let Victor handle you, chicken... But really I'm bored, so I'd rather just deal with you instead, in the most satisfying way I've always done to silly pacifists like you... Snapping their necks with my tongue, without breaking a sweat...

Mortimer Toynbee was a mysterious but charming and comedic English mutant who possessed enhanced leaping capabilities, acrobatic speed, agility, dexterity, reflexes, coordination, balance, a prehensile thirteen foot long tongue, and the ability to spit an acidic mucus that hardened almost instantly. Because of his unusual mutant powers and abilities, he was eventually dubbed by his closest allies and greatest enemies by the moniker of the Toad.

Despite his background history remaining a running mystery to everyone else but him besides being a janitor before his timely mutation, Toad was still infamously known by the public as one of the founding members of the mutant terrorist Magneto's Brotherhood of Mutants. For several years of his life as a loyal follower of Magneto, Toad dedicated his service committing acts of terrorism against the abusive clutches from the rogue side of humanity, especially when the heroic X-Men's existence was finally known to the community, the two groups repeatedly came into conflict with one another. Though he was defeated and arrested multiple times, Toad managed to always escape custody along with his teammates.

After a few years of being an extreme mutant terrorist, Morty eventually earned Magneto's full trust and later became one of his so-called "loyalists" along with several others, which also earned him a higher rank as one of his strongest forces within the Brotherhood. However, their loyalty would be put to the test after a new member was accepted by Magneto to join the Brotherhood, revealing to be the "mutant" scientist Nathan Essex, who was otherwise known as Mister Sinister.

Despite his controversies regarding if he was really a mutant or if he was actually just a mutate and a few of Magneto's loyalists believing that accepting Sinister would be a terrible and horrendous choice for the Brotherhood's future, Essex would later efficiently prove himself to be a worthy member of the mutant supremacy, with Magneto even believing that he was worthier and more useful than most of his loyalists, offending them in the process, including Morty himself. In an attempt to convince Toad of Essex's "true" intentions for the Brotherhood, the latter successfully developed a serum that was able to reverse the mutation on Morty's skin which turned it into green in the first place, reverting it back to normal.

Due to Mister Sinister's eventual betrayal against Magneto, the Brotherhood inevitably broke into two factions, Magneto's and Sinister's side. Alongside Juggernaut, Mystique, Sabretooth, Blob and the remaining members of Magneto's side, Magneto and his original faction later allied themselves with the Ultimates and the rest of the heroes to end Sinister's reign of chaos. But despite their victory in helping the defeat of Sinister, the Brotherhood never manage to reform its state on Genosha, causing for them to have a momentary hiatus and split apart throughout the rest of different parts of the world, remaining to be hidden from the authorities, who began their search on mutant terrorists after the events of the great superhuman war.

After the days of Ultimate War, Morty was one of the unfortunate participants who were captured by the authorities, especially with Toad's infamous status as a dangerous terrorist, despite his efforts to actually end the war alongside Magneto's faction, rather than to win it with the far more diabolical Movement Alliance. Due to his previous and recent crimes as a member of the Brotherhood of Supremacy, Morty was imprisoned at the Raft along with some of his fellow teammates, as a legal response in paying for the mutant terrorists' countless crimes.

During the later days of the Superhuman Registration Act that would subsequently cause the chaotic conflict known as Civil War, Morty and his fellow teammates were eventually broken out of the maximum facility by his own leader, Magneto himself. Toad and the reformed Brotherhood came to help out their fellow helpless mutant fugitives and save them from the abusive and strict forces of the pro-registration led by Iron Man and S.H.I.E.L.D. under the directorship of Maria Hill. However, instead of deciding to fight with Magneto against the authorities, Toad was insisted and obligated to help the others get them into safety by getting them to the recently-abandoned island of Genosha and give them momentary settlement in the meantime.

In the late aftermath of the Phoenix Prophecy, followed the last known man-made assault that would have almost decimated the last hope of mutantkind's ultimate survival. During the first weeks of the newly-elected President of the United States, Larry Trask (son of the late Bolivar Trask), and the morally-corrupt senator Mojo Adams, had publicly announced the secretly corrupt and two-faced administration's first weapon-based project of the restored Trask Industries since the mid 1980's, known as the Sentinel: Mark X Program. According to the anti-mutant organization themselves and the anti-mutant president, the new program solemnly promised a definitive containment of the growing mutant threat, both those who were considered as heroic mutants and those who were actual threats such as the existence of mutant terrorists.

As a result of these actions caused mainly because of a powerful figure's undying hatred and aggression towards the mutant kind, the marginalized race was once again have to face the next largest threat on their own as both the heroic and evil forces of the mutant race were forced to assemble and at the same time, hide within the remote island of Magneto's Citadel, Genosha, along with other remote locations, in the meantime. Mortimer and the surviving members of the Brotherhood, forming into a subdivision faction known as the Morlocks, were willingly present in the assistance of rescuing lost and helpless mutants and human supporters across the United States and several parts across Western Europe, with the help of telepath Emma Frost, the use of the Cerebra, and their access of fast transportaion through Blink's portals.

Unfortunately, during Mortimer and his small team's rescue mission in California, an apparently destroyed Sentinel was able to attach a chip-sized tracker into most of the team before it was fully deactivated, including himself. As they would immediately return back to the island of Genosha, Mortimer was too late to find out that the trackers secretly attached to them gave the Sentinels an ultimate advantage to infiltrate the island full of mutant refugees.

As he and his teammates witnessed the destructive arrival of the mutant killing machines within the Citadel in horror, Mortimer, along with Lorelei (Ubanu), Callisto, Ink, and Fixer, had couragously offered the remainder of their lives in order to give most the mutant refugees enough time to successfully escape the island through several Blackbird aircrafts by fighting the Sentinels, despite being outnumbered and unmatched by the latter. Three days since the Sentinels' assault on Genosha have passed, which subsequently led into the island's gradual destruction, Callisto was later revealed to have been the only known survivor of the attack, sadly confirming Mortimer's demise, along with the rest of her teammates.

Homo Superior Physiology: Toad is a mutant who has displayed and possesses almost all the natural traits and abilities of a toad, most notably his superhuman jumping and leaping abilities. More of his toad-like mutant powers include the following:

Retrieved from "https://marvelcomicsfanon.fandom.com/wiki/Mortimer_Toynbee_(Earth-61615)?oldid=255273"
Community content is available under CC-BY-SA unless otherwise noted.