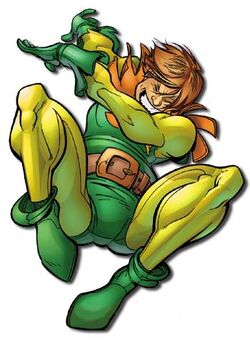 American
Origin
Origin
Reptilian mutant who joined the Brotherhood and the X-Men.
Creators

I've been told by more than a few that I could never amount to anything. But check me out now. I'm part of the two greatest families on Earth: the Lehnsherrs, and the X-Men. I wouldn't give it up for anything.

Toad was a seemingly ordinary child who was abandoned at an early age. Soon, though, he became uglier as his powers manifested. Everyone continually mocked him, and soon he became tired of this. He was very smart, but because of his abuse, people regarded him as mentally challenged. This made him angry at humans. This also made him become pathetically devoted to anyone he thought liked him. Soon, he heard of Magneto's Brotherhood, and he did the first bold thing in his life. He searched for Magneto, and he joined the team.

On the team, he found that he loved Wanda, though she did not return his feelings. This made him even more determined in battle to defeat the X-Men. He turned out to be a powerful and potent fighter after his years of bullying. But soon he saw the explosion that Cyclops caused, and he was able to avoid it with his super-leaping. But afterwards, Wanda disappeared, which devastated Toad on the inside. Soon after, Toad joined the X-Men, and Magneto officially adopted him and raised him as his son. Finally, Mortimer got the love he deserved.

As an X-Man, Mortimer soon encountered the mutant island Krakoa, and he was captured. An emergency squad of X-Men was sent, but they all perished on the mission. Despite the odds or survival, a second squad was sent, and they freed the X-Men, defeated Krakoa, and survived. Shortly after this, the remaining original 3 X-Men formed X-Factor. Mortimer was invited to join, but he turned them down, telling them he was happier as an X-Man.

Retrieved from "https://marvelcomicsfanon.fandom.com/wiki/Mortimer_Toynbee_(Earth-5)?oldid=255483"
Community content is available under CC-BY-SA unless otherwise noted.