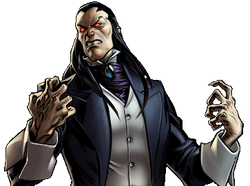 Devourer of Totems, The Lion
Identity

First appearance
What Is A Man?

In the distant past, Morlun and his family took part in a battle against the Master Weaver and succeeded in capturing it and using its power to travel between dimensions and hunt all Spider-Totemic avatars.

At some point in the past, Morlun traveled to Earth-1010 and hunted a Spider-Totem named Ezekiel Sims. Ezekiel would've compiled research on Morlun and taken measures to protect future generations of Spider-Totems, such as Cindy Moon and Peter Parker, explaining the totemic side of their powers, warning them about Morlun, and attempting to take them into protective custody if Morlun hadn't killed him.

Morlun went back to Earth-1010 during a full moon which made the barrier between realities thinner, attempting to kill Spider-Man while passing as a vampire. Parker tried to stab him with a silver stake given to him by Blade, but it was to no use. However, Morlun was surrounded by Dr. Strange and S.H.I.E.L.D.'s Howling Commandos forcing him to flee. Morlun didn't leave this reality yet, as he unlocked Werewolf by Night's protective cage, allowing him to go on a rampage.

Morlun possesses a variety of superhuman attributes as a result of his unique physiology.

Life Force Absorption: Morlun's primary power is the ability to absorb the life force energy of other living creatures, thereby granting himself superhuman physical abilities. Even though Morlun can absorb the energies of virtually any being, he must occasionally renew himself by feeding upon pure forms of animal-related super-beings from one of the four categories that make up his own, unusually pure, DNA such as animal, insect, human, and bird. Once Morlun has touched a human, he is able to sense that person's life force across great distances. While the limit of this ability isn't known, it allowed him to easily follow and track Spider-Man across New York City.

Even though it isn't known exactly how much, if any, formal training he's had, Morlun has proven himself to be a formidable hand to hand combatant.

Morlun must regularly feed on the life forces of other living beings to stay alive. However, in order to renew himself and to prolong his extremely long lifespan, he must feed on totemic (purer) sources occasionally. Morlun has also proven highly vulnerable to exposure to high levels of radiation. However, Morlun must always be concentrating on keeping himself invincible. He eventually lets his guard down when he is feeding. This weakness enabled Ezekiel to break his nose and Spider-Man to kill him. When his guard is down, he is as vulnerable as any regular human.

Retrieved from "https://marvelcomicsfanon.fandom.com/wiki/Morlun_(Earth-1010)?oldid=128209"
Community content is available under CC-BY-SA unless otherwise noted.