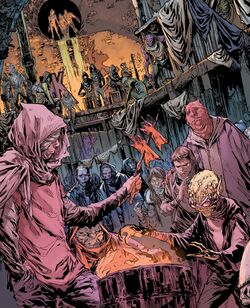 The Morlocks were a large community of mutants and humans who felt they were outcasts, living in the underground tunnels beneath New York, New Jersey, and Connecticut. These tunnels were built in the 1950s by the U.S. Government as shelters in case of a national emergency, and later abandoned. The vast majority of the public had no idea these tunnels existed. There were numerous tunnels stretching out of sight, many unexplored. The main tunnel was 50 feet high and ran the length of Manhattan. It was called "the alley" by its inhabitants.

The Morlocks were outcasts and rebels against surface society who named themselves after subterranean creatures found in H. G. Wells's book, The Time Machine. They were founded by Callisto, who discovered the tunnels and moved into them decades ago, shortly after they were abandoned. She enlisted the aid of Caliban in finding other mutants to create a new underground society and maintained the tunnels until the Mutant Massacre.

Morlock society had no actual class system, except for the leader who all Morlocks obeyed, somewhat like a huge street gang. Until recently, the leader was Callisto. Under her reign, Morlocks often raided the surface world, preying on the lower classes so that losses as a result of their activities would not be noticed. They stole furnishings, food, clothing, and the other necessities of life, but sometimes they stole children, too, as many Morlocks were sterile.

Most Morlocks were hideous and deformed, yet another reason for them to dwell away from society. When Storm and the X-Men offered to help resettle them on the surface, they declined because they felt the tunnels were the right place for them. This image of themselves as almost sub-human psychologically affected most Morlocks who felt frustrated, bitter, and vengeful about their situation.

Morlock society had many of its conflicts settled by combat. The decision of who would be the Morlock leader was settled by mortal combat in the past.

Most of the Morlocks were hunted down and murdered by a group of mutant assassins known as the Marauders.

Retrieved from "https://marvelcomicsfanon.fandom.com/wiki/Morlocks_(Earth-1010)?oldid=175223"
Community content is available under CC-BY-SA unless otherwise noted.