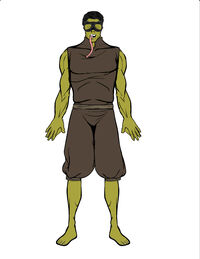 The Toad is superhumanly strong, primarily in his lower body, and is capable of leg pressing 3 tons. He possesses superhuman strength in his upper body as well, although to a much lower degree, and can lift about 1 ton. Toad's elongated tongue is also able to lift heavy weights, though the exact limit is unknown.

The Toad is near-sighted and has an aversion to light. He often wears light filtering goggles that allow him to operate in strong daylight that would otherwise blind him.

Retrieved from "https://marvelcomicsfanon.fandom.com/wiki/Moorti_Toynbee_(Earth-515)?oldid=255268"
Community content is available under CC-BY-SA unless otherwise noted.