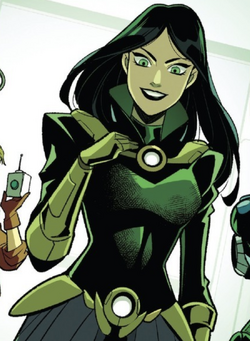 The arrogance of man has always paved the way for the brilliance of woman.

Monica Rappaccini has always been the money behind the Advanced Idea Mechanics. She never liked some of her competition for the title of Scientist Supreme, believing Aldrich Killian to be an arrogant jerk and George Tarleton to be unhinged and untrustworthy.

After both of them met their end in confrontations with the Avengers, Monica rose up to officially take control of the organization. She has been successful in overwriting M.O.D.O.C.’s mainframe into acknowledging her and only her as it’s superior.

Since coming into power, Monica has kept AIM alive following the Avengers attempting to dismantle the organization. She even renewed their partnership with Hydra to keep them in business, constantly supplying them with new technology. Monica was also instrumental in helping them develop their own version of the Super-Soldier Serum.

Retrieved from "https://marvelcomicsfanon.fandom.com/wiki/Monica_Rappaccini_(Earth-101)?oldid=250618"
Community content is available under CC-BY-SA unless otherwise noted.