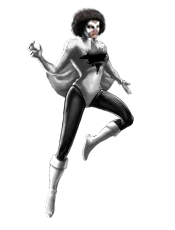 Monica Rambeau was a lieutenant in the New Orleans Harbor Patrol. Fate came upon her one day, when she gained super powers after being bombarded by extradimensional energy, produced by an energy disruptor weapon created by a criminal scientist.

She was originally given the name of Photon by the media. After her initial appearance, Rambeau began experimenting with her powers. Early in her career, during Kang's attack, she met the Avengers. As Photon, she joined and served in the Avengers.

Energy Form: Due to bombardment by extra-dimensional energies, Monica can transform herself into any form of energy within the electromagnetic spectrum. Among the many energy forms she has assumed and is able to control are gamma rays, X-rays, ultraviolet radiation, visible light, electricity, infrared radiation, microwaves and radio waves. She apparently accomplished this transformation by mentally shunting the matter of her body into the dimension from which she draws her energy, and replacing it with a corresponding amount of energy. Her mind remains in the dimension to control the energy-parcel that has taken the place of her body. By assuming an energy-form, she gains all of that energy's properties. Monica is apparently unlimited by the amount of time that she can remain in her energy-form. She can seemingly only transform herself into one wavelength of energy at a time, but she can transform between one energy-state and another in a fraction of a second. As noted above, the limit to the amount of energy she can transmit through her body at a given time is not known. Extensive energy transformation and manipulation can be physically taxing once she returns to her physical form.

Flight: she is capable of flight in any of her wavelengths.

Superhuman Speed: Monica is cable of moving and reacting at superhuman speeds ranging from the speed of sound to lightspeed while in her energy form.

Intangibility She can phase through solid matter and certain energy fields depending on their wavelengths.

Invisibility: She is often invisible in most of her forms but can make herself appear visible.

Energy Duplication: When she encounters a new or unfamiliar energy, Monica can often duplicate it given enough time for analysis.

Energy Absorption: She is capable of absorbing energy given her own energy form is of the right type and at the right wavelength.

Energy Blasts: She mentally controls both type and quantity of energy she wishes to transmit. It is not known the maximum amount of energy she can transmit at a given time. Monica can also divert energy (hard light for example) for use as force beams, which have the equivalent of 300 tons of TNT of explosive force.

Appearance Alteration: Monica can use her facility over light to modulate her energy and modify her appearance, and outwardly take the form of other people. However, when she does so, she doesn't actually change her physical shape nor can she emulate their biometrics.

Eidetic Memory: Ever since she acquired her powers, Monica's photographic memory improved, allowing her to have total recall of everything she sees.