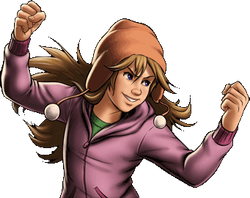 Molly Hayes's origin is the same as that of her Earth-616's counterpart.

Molly is a mutant, and has demonstrated the following abilities:

She was deemed a Low Threat.

Retrieved from "https://marvelcomicsfanon.fandom.com/wiki/Molly_Hayes_(Earth-1010)?oldid=220597"
Community content is available under CC-BY-SA unless otherwise noted.