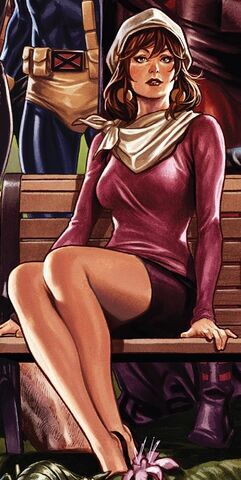 It's not a dream if it's real.

From a very young age, Moira MacTaggart began having very strange dreams. She believed it to be nothing more than a side effect of her overactive imagination, until her dreams began coming true in real life.

After reaching adulthood, she let her dreams guide her, believing that she must be having them for a reason, despite not knowing what it is she truly was. While attending Oxford University, she encountered Charles Xavier, who was open about being a mutant. This led to Moira believing that she may be a mutant as well.

However, she and Charles went their different ways. Moira ended up joining the CIA as a field agent, believing this would give her a good opportunity to insert herself into the chaos to prevent her dreams from coming true. She was eventually placed in charge of monitoring the rise of mutants, which she found ironic. This led to her and Charles reuniting, where she discovered that he had teamed up with a man named Erik Lehnsherr to recruit other mutants.

After she allowed Charles to read her mind, he discovered that she was, in fact, a mutant. This convinced her to keep the X-Force hidden from the CIA, opting to leave the organization and set up shop on Muir Island to try and make scientific strides that might help mutantkind adjust to their abilities.

When Xavier and the X-Force abandoned their home in Westchester and relocated to Krakoa, she began sharing resources with them, even allowing a Krakoan flower to set up a portal between the two islands. When Apocalypse brought the final confrontation between his forces and Xavier's to Muir Island, it resulted in a complete collapse of Moira's workspace. Since then, she has joined Charles and X-Force on Krakoa, offering her services as an Ambassador for Krakoan relations around the world.

Ever since X-Force and the Avengers began sharing resources, Moira's precognitive dreams have been instrumental in predicting the events foretold in the Prophecy of Infinity.