[[Hammer of the Nature Orb]] 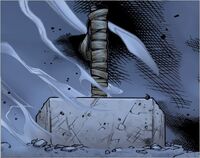 Place of Creation
Edge of Reality

Origin
Born from the remains of the original Mjolnir and other artifacts, when the reality was rebooted by the nine realms' leaders, this was used to house the Orb of Nature.
Owners

When the leaders of the nine realms rebooted their reality, to save themselves from the Serpent, the remains of Mjolnir and other artifacts found in the Edge of Reality were turned into Mjolnir, but this time it was used to house the Orb of Nature, a powerful artifact born of the Edge of Reality rebooting and activating its last defense.

Retrieved from "https://marvelcomicsfanon.fandom.com/wiki/Mjolnir_(Earth-11425)?oldid=76659"
Community content is available under CC-BY-SA unless otherwise noted.