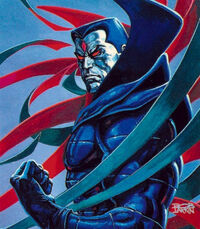 Earth-1992
Base Of Operations
Many bases throughout the world, Mobile
Characteristics
Gender

He is the genetic creation son of Mr. Sinister, who he looks almost exactly like. In his first appearance, he tried to help restore the life of Grigory Rasputin. If he had accomplished his goal, Grigory would have supplied him with the money and resources he needed to bring back his "father", Mr. Sinister, in his real body, so he would be his real self. His plan was thwarted when the X-Men were able to stop Grigory from coming back.

Retrieved from "https://marvelcomicsfanon.fandom.com/wiki/Mister_Insidious_(Earth-1992)?oldid=261955"
Community content is available under CC-BY-SA unless otherwise noted.