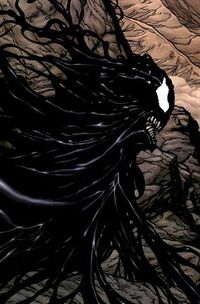 Unknown. The symbiote takes the name of its current host.
Current Alias

The dormant symbiote crash landed on Earth in a meteorite. It was found by Warlord who cast a spell on it to keep it dormant, so that he could control it. The symbiote was injected into the body of a brainwashed Ricardo Rios, transforming him into Misery. The two were set free in New York City by Warlord, so that they could destroy it. They were attacked by Crimson Shadow and they charged at him after they got back up. They were then impaled on steel rods. Crimson Shadow took them to a hospital and when they awoke they attacked everyone in the room. Each person was killed except for Crimson Shadow. They fled to an isolated area where they were met by Warlord. He then proceeded to give them new orders. After recent events, Misery is no longer under the control of Warlord.

The symbiote grants its host superhuman strength, reflexes, and agility. Also it grants its wielder the ability to stick to walls, create web like substance, and tendrils. It also grants limited shape shifting and the ability to mimic any form of clothing.

The Misery symbiote can track any other symbiotes. The symbiote can stick to walls and also has unlimited webbing. It can also blend in with its surroundings and become undetectably camouflaged.

The Misery symbiote, like all others of its kind, is extremely vulnerable to heat and sonic based attacks. They can cause the symbiote physical pain and discomfort; where as "more powerful" attacks might be completely ineffective.

Retrieved from "https://marvelcomicsfanon.fandom.com/wiki/Misery_(Symbiote)_(Earth-616)?oldid=230841"
Community content is available under CC-BY-SA unless otherwise noted.