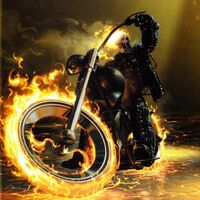 The Rider, Spirit of Vengeance
Identity

Each day it gets harder to live with the Rider. Sometimes he comes out, sometimes he kills, and sometimes...I like it.

Born in Santa Cruz, California, Milo Anthony Carmine, grew up in his father's motorcycle workshop. The two became inseparable in his youth and often worked together on the bikes. His mother died in child birth, leaving the two as the only family they had. During his senior year of high school, Milo joined the marines. He trained rigorously and was soon shipped over seas to the Middle East, where he witnessed the horrors of war. After only 2 weeks of duty, he received a letter stating his father had died in a motorcycle accident. Grief stricken, he continued his tour of duty for five years. When he started experiencing hallucinations, he was diagnosed with post-traumatic stress disorder and sent back to America. Left with only his fathers old bike, he began to roam the states, looking for odd jobs to sustain himself. Until one day, a stranger came to him, offering to remove the nightmares and hallucinations of the war and his father. Eagerly agreeing, Milo signed the contract, becoming the Ghost Rider.

Trained as a Marine, Carmine is well versed in hand to hand combat. As well, he is an adept motorcyclist.

Retrieved from "https://marvelcomicsfanon.fandom.com/wiki/Milo_Carmine_(Earth-516)?oldid=174887"
Community content is available under CC-BY-SA unless otherwise noted.