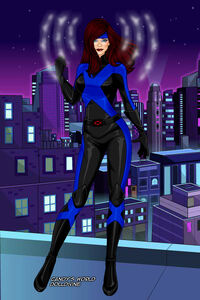 Miley is the youngest daughter of Cyclops and Jean Grey and the younger sister of Cable and current Marvel Girl. Miley is a mutant with an inheritance of Telepathy and Telekinesis from her mother with great control. Her best friends are Torrent, Crusader and Polaris. Miley has a crush on Jimmy Hudson aka the new Wolverine and Torrent’s brother. As a founding member of the Young X-Men the newest mutant superheroes of the next generation she is very determined to carry on the family tradition. Miley served as a Bridesmaid for her sister Rachel’s wedding as she tie the knot to Franklin Richards also known as Psi-Lord and in addition became Miley’s Brother In Law.

Miley is an Omega Level Mutant with an amazing powers she inherited from her mother Jean Grey. She has great control of Telepathy and Telekinesis and she can fly at an incredible speed.

Retrieved from "https://marvelcomicsfanon.fandom.com/wiki/Miley_Summers_(Earth-16160)?oldid=234619"
Community content is available under CC-BY-SA unless otherwise noted.