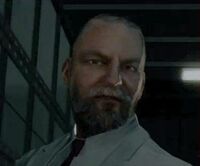 American
Occupation
Head of R&D at OsCorp
Origin
Origin
Raised by an abusive scientist, he became a murderer and was locked away for his insanity. After an accident at Empire State University, he started working for Norman Osborn, where he would make the gear for many criminals.
Place of Birth
Scotland
First appearance
Times Are Hard

Miles Warren was the son of a great scientist and a somewhat ordinary woman. However, his father was scorned and said to be "crazy". His dad turned to drugs and alcohol and abused his wife, and even mercilessly beat Miles. Beat into his head he was worthless, Miles' mental instability first formed when he, in cold blood, murdered his father by cutting off his limbs. He also killed his mother five minutes later for allowing her husband to torment them both. He was sent to a mental institution, and was kept locked away from society until he was 17.

Being a brilliant scientist (even at such a young age), he started teaching a class at Empire State University. While there, he even started dating a local college girl. However, after an attempt to "get intimate", he killed her. This caused his mind to deteriorate even more. However, he left the university, and turned to alcohol.

Soon, he got a call from Norman Osborn, offering him a position as the Head of R&D at OsCorp. He accepted, and became a well known scientist for this, and when Norman became linked to the criminal underworld through accomplice Wilson Fisk, he started to create many suits and weapons for criminals, including the Rhino, Shocker, Scorpion, Sandman, and, supposedly, the Green Goblin.

A brilliant mind and a large variety of resources.

He seems to be mentally unstable.

Retrieved from "https://marvelcomicsfanon.fandom.com/wiki/Miles_Warren_(Earth-41296)?oldid=259353"
Community content is available under CC-BY-SA unless otherwise noted.