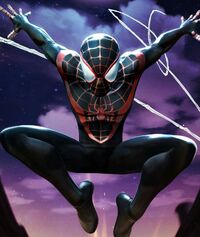 In the Ultimate Spider-Man comic Miles's uncle became a criminal the Prowler but after a fight with Miles he died in a similar way to Peter's uncle's death.

I decided to give my version of Miles the Organic Webbing and he's grown up because he's different character but similar to Peter Parker and Organic Webbing is Spider-Man's main powers not just other powers and the Web Shooters easily run out due to how many Cartridges used. He's working hard learning science like Peter did and thanks to his friend Ganke they became lab partners.

Retrieved from "https://marvelcomicsfanon.fandom.com/wiki/Miles_Morales_(Earth-927601363)?oldid=253737"
Community content is available under CC-BY-SA unless otherwise noted.